Chris Colfer, who many only know from his role as Kurt on Glee,  has a trick or two up his sleeve. The Emmy Award-winning 24 year-old, has also, since 2012, published the chart-topping fantasy book series, The Land of Stories. His first book in the series, The Wishing Spell, aimed at middle-grade readers, also topped the New York Times best seller list for two weeks. The busy author has managed to turn out a book a year in the series, with The Land of Stories: The Enchantress Returns, debuting in 2013 and the third book, The Land of Stories: A Grimm Warning, this year, A fourth novel is scheduled for release in 2015, with a possible fifth in the works, and even hints of a filmed version. 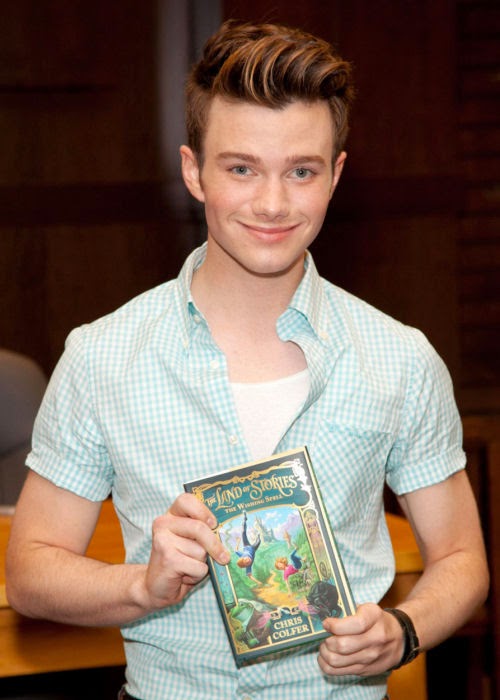 So how good is The Wishing Spell? Well … it was certainly entertaining to read with my ten year-od daughter. Colfer has had fun playing with fairy tale characters like Little Red Riding Hood, Jack (of beanstalk fame), Cinderella, and Goldilocks, just to name a few, giving them a twist here and there to update and involve his young audience. His depiction of the Land of Stores is also intriguing, although I can’t say that I completely buy or understand how it exists simultaneously with our boring old world.

What truly pulled my daughter in the most were his twin protagonists, Alex and Conner Bailey, who fall into a magical world and then have to go on a quest in order to have any hopes of ever getting back home again. There are echoes of The Wizard of Oz, Harry Potter, and the many other “modern” takes on fairy tales in pop culture that have been all the rage lately that may enchant you or not.

Colfer definitely has a love for his subject and his main characters. Where the book falters a bit is in the clumsy prose. My daughter kept pointing out how many “he saids” and “she saids” there were, as if the reader might forget who was speaking from one page to the next. Surely a kind and wise editor could have cleaned that up a bit, removing all the repetition. But all in all, the kid (and I) like how he told his story enough to give the second book a try, to see what happens next, which is what any author would wish for.