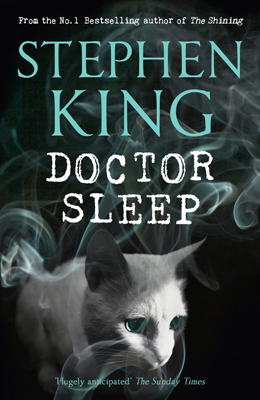 Writing a sequel to a novel is hard. The expectations are high, particularly if the original book was written about thirty-six years ago. You have obsessive fans, critics who would love you to fail and worst of all, nostalgia to deal with. Now imagine that novel is one of the finest examples of horror fiction from the last hundred years, and you start to understand the risks Stephen King has taken with Doctor Sleep. Before we head into this review, I must point out that I have devoured King’s ouvre since the age of twelve, and so have all the above love and baggage along with it.

Danny Torrance has grown up after his ordeals in the Overlook Hotel, but it hasn’t left him. He’s learnt how to lock away and compartmentalise his fears and memories, but that hasn’t stopped him becoming a shadow of his father. A homeless alcoholic, he wanders through America until reaching a hospice that feels right, and then begins his recovery as he helps those close to death have a peaceful end. At the same time, a young girl named Abra is born and grows up, her parents worried by her paranormal abilities. And they are right to be worried, but not for the reasons they think. For there is a group of travellers known as the True Knot who have been moving around the US for decades, murdering young children and feeding off their essences like psychic vampires.

King still has a great turn of phrase and a way of describing impossible supernatural things, such as the horrific image of people flashing in and out of reality as they dissolve, but for me it was his heartfelt glimpses into the elderly people in the hospice that stayed with me the most. As Danny helps them come to turns with their fast approaching mortality, we are treated to a wonderful condensed snippet of life, in an almost stream-of-consciousness collage of important events and feelings. There is also a human side to everyone we meet, as even the revolting True Knot have some love in them, even if that love is twisted into taut ugly bindings.

King was reportedly never happy with the film adaptation of The Shining as directed by Stanley Kubrick, feeling it lacked warmth and trivialised what he considered to be the most important part of the novel – the dark heart of alcoholism. That’s the driving force behind Doctor Sleep. IfThe Shining was a man failing to overcome his demons, then Doctor Sleep is the man beating it but remaining haunted. Alcoholics Anonymous is all over this book, which I did find a little tiring at times. For his 1997 TV adaptation of the novel, King added in a slightly cringy final scene in which it is revealed that Danny’s imaginary friend was himself from the future and that his dad was watching him graduate from beyond the grave. Disgruntled viewers will be pleased to know that this retconning has been relegated to the background, and that The Overlook Hotel is given a proper send off here.

Although a sequel to The Shining, it feels closer in tone to his larger, more epic novels like Dreamcatcher. The Shining was a claustrophobic and terrifying novel with a cast you could count on one hand, whereas Doctor Sleep spans a much wider area and features a diverse cast of psychics, sponsors and vicious travellers. I feel like this was a great way to go – rather than provide a simple retread and visit another haunted hotel to go through the motions, King takes us on a whole new journey, and puts a new spin on both The Shining and Carrie. It could be said that just as much as Doctor Sleep is a novel about a man who overcame his problems, it’s also about what could have been for Carrie herself. Brought up by a loving family and tutored by someone who knows what she is going through, Abra has a chance at living a happy life, rather than Carrie’s short and isolated one at the hands of her paranoid and dangerous mother.

This is a novel I would wholeheartedly recommend to fans of Stephen King, particularly those who enjoyed his similarly mind-entering Dreamcatcher. It’s a slowburner of a novel, and I think King has managed to hit the right notes to avoid tainting the legacy of The Shining, and instead manages to add to it.