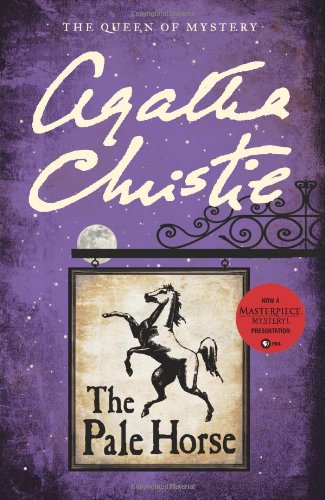 My first review of an Agatha Christie book was of They Came to Baghdad, a light-hearted romp through global conspiracies to bring about World War III, archaeological digs, mistaken identity, and the intricacies of romance with a man who looks like Lucifer, star of the morning. Despite the joie de vivre of heroine Victoria, and the comic aspects of the perilous situations she found herself in, the central message of Baghdad was that it is better to “serve in heaven than reign in hell,” that what matters most is ordinary people and their everyday lives.

The Pale Horse (1961) also carries apocalyptic overtones, and a similar warning against the assumption of power over the fate of one’s fellow men and women, but it’s a far more serious and subtle novel. Again, there’s a conspiracy, but its methods are more insidious and its targets are personal rather than political. It’s hard to say much about the novel without giving away its secrets, which are deliberately shrouded in layers of unlikeliness, but the bare skeleton of the premise is as follows: A dying woman makes her final confession to a priest, who writes down a list of names. Shortly after–in the first few pages–he is murdered. Police investigate, and find themselves at a number of dead ends.  Historian Mark Easterbrook adds a few snippets of casual conversation to a couple of coincidences and chance encounters, and eventually ends up discovering a particularly fantastical, cold-blooded solution. With the help of a country vicar’s wife and a gutsy female sidekick, he concocts a dangerous plan to bring things out into the open and find actual proof of wrong-doing–and this involves dabbling in witchcraft.

The novel is shot through with musing on the relationship between modern life, science and rationality on the one hand, and superstition, the powers of suggestion, and even the supernatural on the other. Mark’s narrative does have some humour, which helps to balance out all the gloom and paranoia, and he’s a generally likeable hero who helps to ground the novel. Christie shadows ordinary technology and everyday interactions with uncanny potential, and her consideration of the nature of evil in The Pale Horse is one of the most sophisticated in her oeuvre, and one of the elements I found most interesting. The final resolution is interesting, but not entirely convincing, I found–but it’s a thoroughly enjoyable read with the occasional spine-tingling shiver.

The Pale Horse takes its title from Revelation 6:8:  “And I looked, and behold a pale horse: and his name that sat on him was Death, and Hell followed with him.”

I used to blog as Funkyfacecat, but I’ve updated my site to drdoombiscuits.wordpress.com. Find me there or on twitter at doombiscuits.twitter.com.