If the seven stones dishonored be,
And slain the noble willow tree,
Revenge will come each thirty year
Til seven infant deaths bring fear.

These lines are from the Prophecy of Blind Meg. So far six Minerva children have died, all on Solstice Eve, and now Jim, who has just moved onto the Minerva Estate with this father and sister, is hearing a ghostly voice telling him to “Find the Seventh”.  Jim begins getting ghostly visions of how each of the six previous children died, and he’s trying to figure out what these ghostly children want him to do.  Is he supposed to save Henry, the autistic son of the mean-spirited owner of the Minerva Estate who is supposed to be away at boarding school, but who Jim has seen wandering the grounds of the estate? And how can he figure anything out when Lord Minerva is watching his every move with a plethora of security cameras and keeps threatening to fire Jim’s dad if Jim doesn’t quit roaming the estate? When Jim finally hears the end of Blind Meg’s Prophecy, “Then let the skytale tell a stranger, How he may prevent this mortal danger”, Jim knows that he must defy Lord Minerva and his father to solve the mystery  that could cost more than one person’s life. 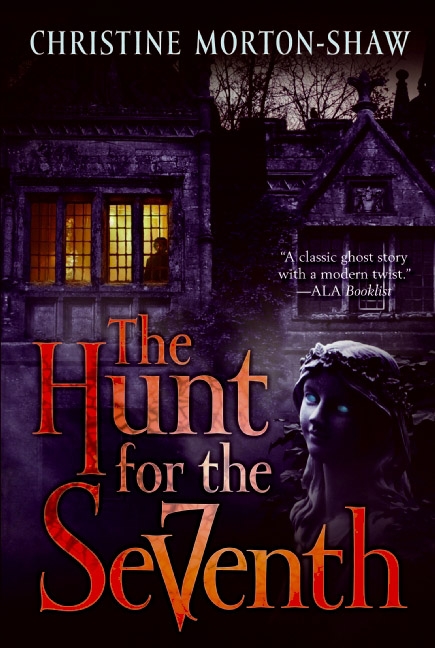 The Hunt for the Seventh is a classic ghost tale set on a sprawling British estate. The mystery of what or who the “seventh” is and what exactly Jim is supposed to do when he finds the “seventh” takes twists and turns until the very end. Jim spends most of his time alone trying to figure out the mystery of the estate because he doesn’t feel that he can or should involve his dad or his sister. The characters that Jim encounters along the way are not always who they at first appear to be which sets up the biggest plot twist of the book.

Overall I enjoyed the book. The story kept me wondering how Jim was going to overcome the obstacles that his dad and Lord Minerva were putting in his way. The story is set in Great Britain, so I was a bit unfamiliar with some of the British slang and colloquialisms in the book, and there weren’t always enough context clues to help me figure them out. I was expecting a good ghost story, but I wasn’t really expecting the paganism that is a part of the story. The story is supposed to be set in modern times, but the people in the story seem to still believe in “cunning women” (healers/witches) are still making offerings to nature spirits. In spite of this, I still think it is a mystery that kids will enjoy reading.