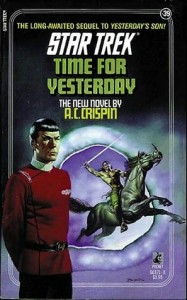 “I wish that once, just once, I could command a mission where everything goes perfectly.  Everything.  The transporter functions without a hitch, both the warp drive and the impulse engines stay on-line for the duration, nobody from security suffers so much as a hangnail, and the ship’s computer doesn’t even hiccup.”

Since this a sequel to the same author’s “Yesterday’s Son,” I decided to read it out of order.  It’s actually #39 in the Pocketbooks series, while “Yesterday’s Son” is #11.  I shouldn’t have done this; it’s not a direct sequel.  The action in “Time For Yesterday” takes place about 15 years after the events of the first novel. It references other things that have happened in the Star Trek novel-verse since then, so reading it out of sequence was not really a good idea.

The Guardian of Forever has stopped doing its job—regulating time—and stars are exploding.  Spock attempts a mindmeld, but fails and realizes only one person can meld with The Guardian:  his son Zar.  But Zar is trapped in the past, trying to save his own planet’s history. They attempt to retrieve him, but he refuses to return with them because his people need him. The Enterprise crew must help Zar secure his planet’s future so he will return to the present and save the rest of the future.  This all of course takes place in the future.  Also in the very distant past.  Time travel is very confusing.

It’s a pretty good book—far better than most of the books so far.  But it feels like a fantasy novel shoe-horned into the Star Trek universe.  Too many “she must perforce believe”s and “fair morning, my lord”s for my taste.  But I do love A.C. Crispin, so I am torn and want to like it more than I actually do.

Random Thoughts Written Down as I Read:

That is a really extra-super-cheesy picture of Zar on the cover.

This novel provides some pretty good support for the Spock/Uhura romance that turns up in the 2009 Star Trek movie.

Here are  Beranardi al Auriga, Fang, and Max Arrunja from “The Entropy Effect!”  And Lt. Kevin Riley!  It’s old home week on the Enterprise!  (What does ‘old home week’ mean?)

McCoy finally gets to wolf-whistle.  But it’s not sexist; it’s to attract attention.

How do you pronounce an apostrophe?

The beings who created The Guardian of Forever (the Originators) are also the Preservers and the seeders of the galaxy.

There are elements here that feel like the Nexus from “Star Trek Generations,” written about 10 years later.

We spend a lot of time detailing the rehab on Zar’s leg.

“Kirk’s response was short and to the point.”