After taking on the rather draining Tiptree anthology, I wanted to rest my heart and mind and spirit. So I am revisiting one of my most cherished treasures: Ursula K. Le Guin’s Earthsea cycle. I was 10 or 12 when I discovered this series, and I fell precipitously in love with it. It was my gateway drug to the world of fantasy and SF.

A Wizard of Earthsea is, at heart, a classic story of a Young Wizard who Comes Of Age And Goes On A Quest. Ged, also called Sparrowhawk, is seven when his talent for magic is discovered; he is apprenticed to the village witch, and later to a respected mage who lives a quiet, almost cloistered life. But Ged craves adventure, power, and knowledge, and so he goes to the School for Wizards on Roke Island to continue his education. There his arrogance and insecurity get the better of him, leading him to meddle with powerful forces and loosing an uncontrollable shadow upon the world.

I’ve rewritten that summary about 10 times, and yet I can’t make it come anywhere close to capturing what makes A Wizard of Earthsea so amazing. First: Earthsea itself. 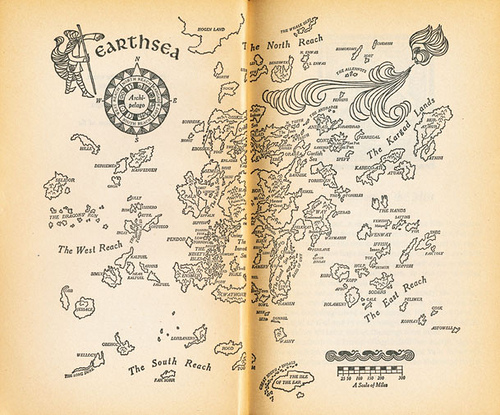 I am a sucker for a good map at the front of a book. LOOK AT THAT. Wait, here’s an even bigger version! You’d be forgiven for just staring at the map for a few hours, before you even turned the page and started chapter one.

This is world-building of the highest order. The detail in that large map is nothing to the detail that must be living in Le Guin’s head. She doles it out so skillfully that the flow of the narrative is never interrupted. A Wizard of Earthsea takes us from Gont to Roke to the Ninety Isles to Pendor to Osskil to the desolate East Reach and off the very edge of the map of Earthsea, and along the way we learn about Earthsea’s afterlife, its systems of trade and government, how its magic functions, and its religions (which might be more accurately described as folk traditions). Oh, also: there are dragons! 10 bonus points for dragons.

Second: Le Guin’s prose is, simply, some of the best there is. Her writing is spare and lyrical, just begging to be read aloud. From the very first lines, it has the feel of an old legend, told and retold around hearth fires for generations:

“The island of Gont, a single mountain that lifts its peak a mile above the storm-racked Northeast Sea, is  a land famous for wizards. From the towns in its high valleys and the ports on its dark narrow bays many a Gontishman has gone forth to serve the Lords of the Archipelago in their cities as wizard or mage, or, looking for adventure, to wander working magic from isle to isle of all Earthsea. Of these some say the greatest, and surely the greatest voyager, was the man called Sparrowhawk, who in his day became both dragon lord and Archmage. His life is told of in the Deed of Ged and in many songs, but this is a tale of the time before his fame, before the songs were made.”

Le Guin’s gift for alliteration brings us beautiful little phrases like “nameless and naked he walked into the cold springs…” And her ear for rhythm turns a description of the midsummer Long Dance into a syncopated dance itself:

“When the chant was finished the Long Dance began. Townsfolk and Masters and students and farmers all together, men and women, danced in the warm dust and dusk down all the roads of Roke to the sea-beaches, to the beat of drums and drone of pipes and flutes.”

Honestly, her prose is so effortless and beautiful that sometimes I read Le Guin and I just despair of ever writing anything even a tenth as good.

Third: Magic in Earthsea is an elegant system, divided into nine disciplines including Summoning, Changing, Herbal (healing), and Hand (illusion); but the heart of the power is Naming. In the Old Speech, a thing’s (or a person’s) name is its essence. Only when you know something’s true name, when you understand every aspect of it, can you affect it. And when you truly change something, you change everything around it as well, so you must act with great care. I find this such a compelling idea – magic requiring not just rote memorization or raw power, but intimate knowledge and dedication and responsibility. There are echoes of Jung and Taoism here as well, and we are reminded that you cannot master the world until you can master yourself.

Fourth: Take a look at how Le Guin describes Ged. “He was a dark man, like most Gontishmen, dark copper-brown…” And what about the raiders who attack Ged’s village early in the book? “They are a savage people, white-skinned, yellow-haired, and fierce…” In 2014 it’s still notable to find a fantasy series with a POC main character. But way back in 1968, Le Guin matter-of-factly tells us that Ged – and almost everyone else in the book – is not white. (AHEM, Sci Fi.)

I must issue one demerit, however. This book is sorely lacking in female characters. Part of this is probably due to the plot: in Earthsea, wizards are male, and the school in Roke is roughly a cross between an English boys’ boarding school and a monastery. For the most part, Ged lives in a world of men. (“There is a saying on Gont, Weak as woman’s magic, and there is another saying, Wicked as woman’s magic.” Le Guin isn’t necessarily endorsing that attitude in her characters, but this book does nothing to challenge it.) Of the few women he encounters, most are depicted as temptresses or distractions, either deliberately manipulative or unintentionally leading him astray. I didn’t notice this the first time I read it – and on rereads I’ve tended to forgive it due to my enduring love for the series – but even though it doesn’t detract (much) from my enjoyment, it is a definite fault.

I recommend A Wizard of Earthsea to – well, everyone, really, but especially fans of Harry Potter, LOTR, and other high fantasy novels. It’s paced perfectly and moves along without dragging, and every detail that Le Guin reveals hints that there is a wider, richer world waiting to be explored in the rest of the series. It is technically YA but there is plenty here for older readers as well. Dive in, everyone, the water is fine.