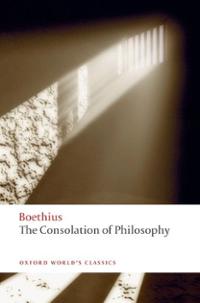 Boethius, a prominent statesmen in Italy (after the fall of the western part of the Roman Empire), wrote The Consolation of Philosophy while imprisoned for treason after having been one of the most important advisors to the king of Italy. He declares himself innocent of the charges, and as this piece begins, he is in despair, under arrest. It is at this time that his old muse, Philosophy, comes to him, to console him and remind him of himself and the actual path to happiness.  […]