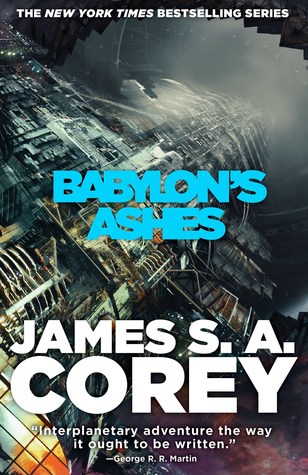 I still think this is one of the best books in the series but in a more stealthy way than book five, which is a WHOPPER. The rest of the series is also more actiony and intense, but this one is more about showing the consequences of what’s already happened, and laying hints for what’s to come than it is about BIG moments. I really appreciate that the Corey duo can do both, and I think the series is better for it.

One of the things that has to be resolved before we can move on to the conflict in the final three books is the problem of Marco Inaros and the Free Navy, and the larger problem of the Belt and its inhabitants in this post-Earth world. I think all of that is handled very well, and I think the fact that the authors have SO many POV characters this time is to absolutely give us a widespread view of the expanse (heh) of the story and what’s going on. This is the only book in the series with more than a handful of POV characters, and it’s more than twenty.

I still have yet to watch the final season of The Expanse TV show, which adapts this book (and parts of the others?? I don’t know) because I’m worried it won’t be a satisfying ending to the series. This is an irrational fear, I think, because the book series could have stopped here with this one if the authors wanted and it would have been a satisfying ending, so why can’t that work for the show, too?

On to Persepolis Rising. I am extremely interested to see how I feel about these last four books, because while I was reading them I was constantly getting the feeling that on re-read I would like them better.