> FAQ Home
> Genre: Audiobooks > This book really made me not give a F*ck 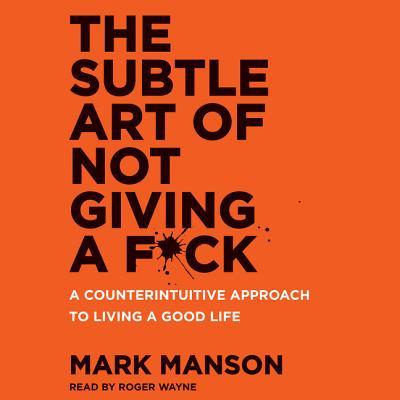 I’m not sure what got me to read this book, but apparently something enticed me. I think I liked the idea of not being positive all the time. I have a tendency to be relentlessly positive. Sometimes it works, but sometimes it doesn’t.

I’m not sure if my problem was the narrator, or the words, but I was frequently annoyed by this book.

I think one of my issues was the gratuitous F bombs. Like obviously by the title, there will be F*cks. I have no issue with that. I’m a bit of a swearer myself (understatement of the year), so the word does not bother me. However, it almost felt to me like “I’m just saying f*ck because it’s in the title of my book”. That doesn’t float my boat.

I just read a review that really sums up my feelings: Manson began the first few chapters with a lot of “Fuck this, fuck that, fuck you” kind of attitude. I can take cursing, but this, was kind of tiring. This was like listening to a young person that has just discovered the art of cursing. It sucked.

I guess I really felt like the rest of the book was just common sense then, and a waste of time? Don’t spend time on things that don’t matter.  Um, ok, got it. Care about important things. Yep, got that too. Just like silly duh stuff I guess?

The final nail in the coffin was the just dude mentality. He talked a lot about how many women he met and had sex with. Like a lot. Again – it felt like he was a teen trying to impress you.

I don’t really think you should read this 🙂