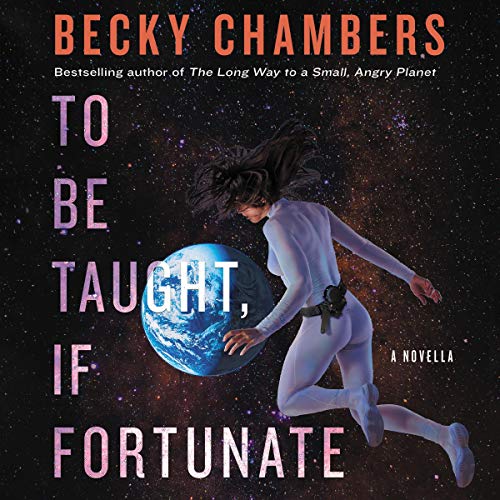 I downloaded this audiobook from my library.  I remember thinking “Ooh, I wanted to read this book.”  I think I made it through the first sentence before I said to myself “Ooh, I already read this book.”  I really didn’t remember most of it though.  Thankfully it was just as good the second time around!  It’s also a short book, so it was nice to read after Dune, which took me almost two weeks to finish.  I think this audiobook was around 4 or 5 hours.  That was just enough time to get into the characters and the worlds.

This book is about four astronauts who are part of an exploratory space crew.  It’s many years in the future, so technology has advanced to the point of astronauts being able to basically safely sleep (torpor) while travelling many light years away from Earth.  Ariadne is the main character, and she tells their story with grace, humility, and lots of empathy.  I know I cried at least three or four times while listening to this book.  The way she describes the events happening to and around the astronauts is just so relatable.

The astronauts explore four very distinct planets on their journey.  By the time they head home to earth, eighty Earth years will have elapsed.  Basically everyone they know and love will be dead.  That takes some intense fortitude.

Ariadne describes each planet and how she’s been altered by the enzymes provided during torpor in detail.  They’re vivid descriptions, and you can see her change each time she wakes up, and you can picture yourself on each different planet.

There’s one scene that I did remember because I have intense animal empathy.  There’s a creature that gets into their spaceship that has to be euthanized.  I had to fast forward through that part because it just hurt to listen to.  That’s a testament to Becky Chambers’ (through the character of Ariadne) storytelling ability.

I find it funny that I read this book twice, because I’m usually a straight down the line suspense / murder / horror lover.  There’s no murder in this book.  I was going to say there’s no horror, but I think I’m afraid of space, so that might not be true!  I’ve always been interested in sci fi though, and this is chock full of sci fi.  But at its core, it’s about people.  I loved Battlestar Galactica (the remake show).  Yes it was about space and cyborgs and war, but at it’s core it was about how people reacted to all of those monumental things.  I think that’s why I liked this book so much.  Also, at the very end, the title of the book is spoken!  I’m a sucker for that for some reason 🙂  Apparently it comes from the opening audio recording on the Voyager Golden Record, which are two phonograph records that were included aboard both Voyager spacecraft launched in 1977.  They include sounds and images portraying the diversity of life and culture on Earth, and are intended for any intelligent extraterrestrial life form who may find them.  They’re kind of a perfect relation to this book.  Here’s the quote from Kurt Waldheim:

“As the Secretary General of the United Nations, an organization of the 147 member states who represent almost all of the human inhabitants of the planet Earth, I send greetings on behalf of the people of our planet. We step out of our solar system into the universe seeking only peace and friendship, to teach if we are called upon, to be taught if we are fortunate.  We know full well that our planet and all its inhabitants are but a small part of this immense universe that surrounds us and it is with humility and hope that we take this step.”