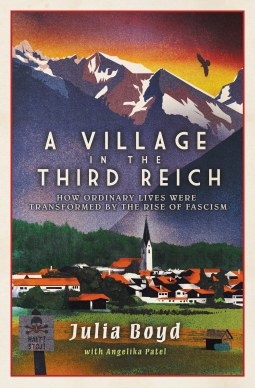 Wars come and go, but life goes on. And so it went on in the village of Oberstdorf throughout the 1930s and 1940s, with the rise and fall of Nazism an undercurrent all along – except it was one that swelled in a way that even a quiet little village couldn’t ignore.

A few years ago I took a class called Experiencing Total War, in which I learned about what it was like for the average person to live through the world wars. It was a fascinating class that highlighted the ordinary voices of war, and it remains one of my favorite classes I ever took. It was on the strength of this that I picked up this book, for that is its purpose – seeing how the Third Reich unfolded in an ordinary Bavarian village.

For the most part I found this an interesting read. The book is well-researched and delves into many aspects of life during the Third Reich, showing how the government pervaded every part of one’s daily activities. I liked that the chapters were organized thematically rather than chronologically, which made it easier to follow.

There were some quite emotional parts to the story – for example I doubt I will ever forget the chapter on how the regime murdered people with disabilities which depicted the injustice through a case study. However, for the most part I had some trouble following who was who, despite the list of townspeople at the back of the book, and this kept me from getting too emotionally invested.

Overall an interesting read about life during World War 2.