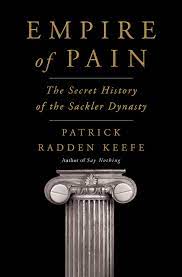 Would you like to know something interesting that I have in common with James Comey? We both had the embarrassing misapprehension when we first heard of Purdue Pharma that it was linked to Perdue Farms, as in chicken.  This speaks to the success of the Sackler family campaign to keep their name, and their business interests, largely out of the public eye for a long time. This excellent book by Patrick Radden Keefe (author of Say Nothing, another empathetic and informative book) exposes the Sackler family and makes explicit their connection to their family business(es) – namely, Purdue Pharma, whose star product has been OxyContin for decades. PRK is an objective writer who does his due diligence, presenting as many sides of a given issue as he can – and yet, it’s clear that in writing this at all, that willingness to talk openly about the Sackler family is, for that family at least, a line drawn in the sand. For years, they have produced a product that was engineered to have an impact on our society. They went to great lengths, spent billions of dollars to ensure that communities around the country and abroad would be flooded with their product – and yet, they did not want anyone to be able to trace that product back to their own family name.

This is a book review, not a cultural commentary, so it’s important for you, a potential reader, to know that this book is well worth your time. At 450ish pages, it’s a commitment (for me, non-fiction takes about twice as long to read, which is always a factor in whether I’m ready for a book). It’s dense but so well written that you feel engaged in the story. The book is divided into three parts. Part 1 is focused on the Sackler family – primarily Arthur, the eldest of the three Sackler brothers. As the three sons of immigrants in the early 20th century, they did what many generations after them would never be able to do again – they worked their way from near poverty to being incredibly wealthy, a true “rags to riches” story (side note, unrelated to anything having to do with this book but I have to ask – does anyone remember that show, Rags to Riches? Were “singing orphans” just wildly popular in the 80s?). Arthur, as the oldest, essentially laid the foundation for his brothers. He went to medical school, and encouraged his brothers to do the same. His dual interest in marketing laid a foundation for melding business interests / advertising and medicine. He and his brothers, along with a fourth friend, Bill Frohlich, merged their interests and set off into business together. This part reveals how the three brothers invested in their ideas – for the most part, they felt they were doing real good in the world. But overall, they wanted money – and they got it.

Part 2 focuses on what happens with Purdue Pharma after Arthur’s death in 1987. Here we learn about the meteoric rise of OxyContin, and PRK provides a compelling glimpse into the intentional marketing plan and business practices that sustained its prominence in our communities. We also learn more about the devastation caused by opiate abuse. The details here are what make the book worthwhile – many of us know a semblance of the outline of the opioid addiction crisis we have been fumbling through as a society. But I have never had access to this level of detail about the level of coordination that has been involved in tracking all sorts of data relevant to the issue. Part 3 delves into the law suits that, again, many of us may be familiar with on a surface level. Here, the veil is pulled back and we can see more cogs in this wheel.  The details throughout the book range from more mundane or gossipy details about the family lives of the Sackler’s, to more nuanced discussions about the role of pain management for doctors.

This book is a window.  It may be more painful for those of us who have lost someone, or many people, to this crisis. In the later chapters, as we read about the lawsuits and attempts to hold Purdue Pharma and the Sacklers accountable, we read about victims who made the mistake of participating in a legal hearing – potentially one of the only times the Sackler family was actually “present” (via Zoom) for victims to share their stories – and that disconnect between WHAT our system is designed for and WHO it works for was achingly palpable. There is room in our society for nuanced discussion about serious problems – and PRK acknowledges that Purdue Pharma, and the Sackler’s, are not uniquely responsible for the opioid crisis. But the striking detachment between the purveyors of these drugs and the actual people who use them is never more clear than in the pages of this book.  This book provides a sense of what the Sackler’s might be thinking about their own actions and decisions – they never want to admit anything close to fault in ANY part of this crisis. They see themselves as victims, yet! Almost all reasonable people reading these details would see them as something far less than victims – but, given the lack of accountability they have routinely faced, it is hard to say THEY are the ones denying reality when they claim that they have “done nothing wrong”. The most galling part of this book are the ways in which the Sackler’s successfully manipulated various systems and routinely ignored conflicts of interests. More than one official questioned the purpose of their government agency when any intended oversight was rendered moot in the face of what a private business making billions could offer those willing to prop it up.

I hope you read this book. I am glad that it exists, despite the very real desire of the Sackler’s to remain dissociated from their own family business. The author strikes a balance between delving into a story and providing factual reporting. There is enough here to empathize with the Sackler family as humans – and enough to better understand their impact on their broader community.  If you decide to read it, you should know that there are descriptions of abuse, details about how OxyContin in particular can be used an illicit drug, and stories from people who lost a loved one to abuse. As mentioned, it is 450 dense pages, and there are plenty of details about our broken systems – what I’m trying to say is that this is not light reading material. If you’re looking for a cozy book or a beach read, this might linger on the TBR shelf for a while longer. But don’t put off reading it for too long, there’s a lot here that’s worth our time.

If you’re looking for substance use treatment, here’s a helpful treatment locator: https://findtreatment.gov/, or call 1-800-662-HELP (4357)