What I have to say about this book can be whittled down to one classic Samuel L. Jackson moment in cinema: 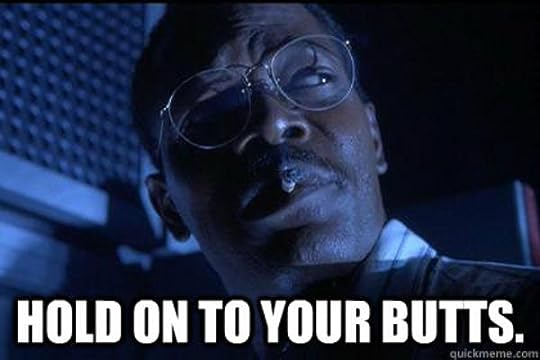 And I truly mean that. Anyone with an ounce of empathy will find this one a tough go.

Moore extensively researched the women this story is about, and she pulled not only from scholarly books and articles about them, but from their own personal correspondence, journals, and memories from friends and family. The result is that you get a clear picture of just exactly how far these literal shining girls (they glowed from all the radium) fell as their health began to fail, and the radium that was slowly poisoning them wreaked its havoc on their bodies. This is some body horror shit, let’s be frank. The beyond good wages these companies paid these women are nothing in comparison to what their careless capitalism, greed, and willful ignorance cost the women in return. It was known since 1901 that radium was harmful, if not exactly how. The dial-painting factories started up in the early 1920s and continued, as a horrifying post-script informs us, through the 1970s, even after not one but two well-publicized trials resulted in the knowledge that radium was a gruesome, wrenching killer.

Moore, who is British, is a great writer, and she shepherds this story with apparent ease. Even as the stories of these girls were horrifyingly monotonous and grim, the same awful things playing out again and again, the book remains engaging. I did the audio, and while it wasn’t great, it wasn’t awful, either. Narrator Angela Brazil was a bit robotic. A British narrator would have been better, to give us more a taste of the voice of the author, who is not entirely absent from these pages. This is not an objective journalistic take. Moore takes sides, and she is firmly on the side of these women.

So, if you have the stomach and emotional stability for it, I highly recommend this one. Just be warned your nightmares might suddenly feature your teeth and jaws rotting out of your head for the next several months.