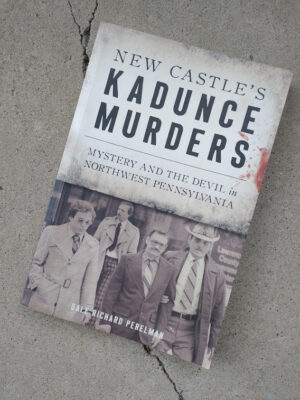 I think this close to Halloween, it’s fitting that I picked a book about a murder in my hometown that haunted my middle school dreams.

New Castle is a small rust belt town about an hour and 1/2 northwest of Pittsburgh. By the time I was growing up in the 70’s and 80’s, most of the city was already in decline as local industry and jobs dried up. It wasn’t a bad place to grow up though. The crime rate wasn’t terrible and most of the area schools were fairly decent. That might be why this murder lodged in my adolescent brain a bit. It was a novelty. (Although, after reading this book I did find out there was at least one other similar murder that happened around the same time.)

In the Summer of 1978, a mother and daughter were both stabbed 17 times and the mother was also shot. These murders became local legend quickly. The rumor mill and news coverage fanned the flames and the grisly nature of it made that easy. The daughter was only 4 years old and the image of that poor little girl stabbed so many times was heartbreaking and terrifying.

As small towns go, a cast of characters (what my mother would refer to as “New Castle’s Finest”) were interviewed and three main suspects emerged: the husband, a local man already convicted of rape and possibly involved in other murders, and a local self-proclaimed Satanist. Drugs and homosexuality were also thrown in the mix during a time when both were bundled together as “deviant.” It’s a big pot of small town misogyny, homophobia and Satanic Panic.

The author of this book owned a jewelry store in town when I was a kid and his children were classmates of mine. Honestly, the most fascinating thing about this book to me is how the heck that guy ended up writing this book. Apparently, Perelman wrote this in the late 1980’s and shelved it until its publication in 2019. Into the 1990’s, he was still researching and visiting the jails where the two men eventually convicted of the crime were incarcerated.

The book covers the murder and each of the trials of the three men accused of the murders. I had to remind myself that it was written mostly in the late 1980’s but there was an occasional judge-y tone here that was a bit classicist and sexist. I’d like to think that it was meant to convey the personalities of the law enforcement, legal teams and players in this crime, but I’m not so sure.

Interesting if you are from the area and probably an excellent hometown murder for My Favorite Murder to tackle but not exactly a well-written must read.