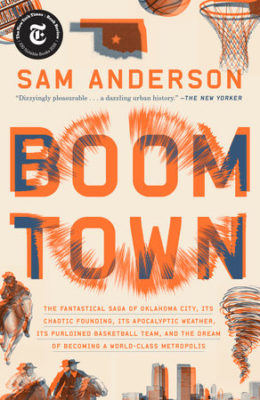 I’ve never been to Oklahoma City. If you’d asked me before I read this book what I knew about it, I think I would have had trouble thinking of a single thing beyond tornadoes and the Oklahoma City bombing. I have zero interest in professional basketball, so I’m not even sure I knew they had a team. Thank goodness for the Sportsball square in Bingo, otherwise I never would have read this.

Boom Town is the entire story of Oklahoma City, from its wild, disorganized founding (people literally raced from a starting line a few miles away from what is now downtown to claim the section of prairie they wanted) to the start of the 2016-2017 NBA season, when beloved star forward Kevin Durant left for the Golden State Warriors, and wild card Russell Westbrook signed on for three more years. Chapters that recount the history of the city are interspersed with chapters on Oklahoma weather, local weirdo Wayne Coyne (lead singer of the Flaming Lips), and a detailed history of the Oklahoma City Thunder, beginning with its 2012-2013 season–the one where they traded away future star James Harden right before the season started. The chronology of the book bothered me for awhile, as it jumps around quite a bit, but I think it makes sense for the place it is describing, as Oklahoma City is kind of a jumbled up, disorganized kind of place. The Goodreads description for Boom Town calls it, “kaleidoscopic,” which is really the perfect word. The chapters are short, and thanks to Wayne Coyne and plenty of other local eccentrics, quite colorful.

This book frequently made me sad. I was 13 when the Oklahoma City bombing happened, so there was a lot of detail there that I didn’t know. There were chapters on Clara Luper and Roscoe Dunjee, two important figures in the civil rights movement who I’d never heard of before. There’s a chapter devoted to Daniel Orton, a former Thunder player who grew up in Oklahoma City, and his story made me feel sad, too. There’s a section on the terribly-conceived “urban renewal” plan that led city leaders to gut the downtown in the 70s, something that it took the city decades to recover from. But for some reason the chapter that actually brought me to tears was the one where the city opened up a time capsule in 2013 that had been buried for 100 years. It’s beautifully written, and somehow the hope of those long-dead residents just struck a nerve.

I’m trying to think of someone I WOULDN’T recommend this book to. If you like nonfiction, history, sports, music–you should read this book. If you have any connection to Oklahoma whatsoever, if you’ve ever wanted to learn more about tornadoes or how and why professional sports teams might change cities, if you have any interest in city planning–you should read this book. If you like the Flaming Lips you will suddenly start reading a lot more into their lyrics. As a person who disapproves heartily of most professional sports organizations and has never been to an NBA game (and passionately hates the flowery, barfy prose that sports journalists use)–the chapters on the Thunder were fascinating in a way that leads me to say that you really need no connection whatsoever to the topics within in order to enjoy it. This is just a really good book.