The Book Bingo Reading Challenge is Here
> FAQ Home
> Genre: Graphic Novel/Comic > I did end up reading through Vol. 4, and it’s better but I still feel kind of weird about it.

Ugh, why you gotta ruin a good thing, John and Rob?* Ugh. I don’t know what to think about this series now. I sort of have whiplash. Since I have Vols. 3-5 checked out from the library right now I’ll probably keep going, but with a warier eye now. Ugh.

*The writer and artist, respectively. Who, for context, are both white.

So basically there are two things ruining my enjoyment here, and I almost two-starred this, but I want to see what happens and if the series course corrects. And both these dudes are to blame, in my opinion. The first volume had this satirical lens that seemed to say that it didn’t approve of the characters much, so I was able to just let the bad behavior and grossness of some characters go, but here it seems like the narrative voice, or whatever, condones the bad behavior? It’s hard to explain. Mostly it’s to do with the way that Tony’s partner John Colby (now a cyborg after the butcher’s knife to his face in the first volume maimed him) is a bigot. I think? This is why I’m torn. He uses racial and sexual orientation slurs (the f-word, for one), and says to Tony he doesn’t want to get in the car with an Asian driver, but then Tony laughs like he knows it’s not serious? It’s weird. I couldn’t decide what the story wanted me to think about either of them. Also, after using the f-word (not fuck! that word is great) it is then implied (er, heavily) that John is queer himself. So . . . I’m just disturbed and confused and feel like the story isn’t telling me how I should feel about any of it.

As for the art, a lot of the characters have this quirky, caricature-like style that I appreciate, but some of them verge on the limit of bigotry. They make me uncomfortable. The chef on a fictional island, who is wrapped up in a scheme to export alien fruit that tastes like chicken was one of them.
And this one, an USDA agent named Lin Sae Woo, who looks like this: 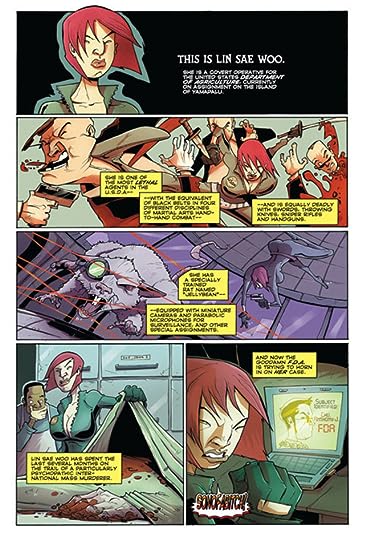 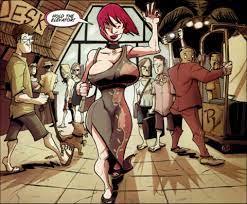 Get the fuck out of here, Rob Guillory, what the fuck are you doing? Why are only some characters getting to look like humans and others like subhumans with weird legs and offensively large boobs? And there’s this character I really liked later in the book who is later portrayed as being too large for her clothes, with the buttons straining on her shirt, implying she’s either too fat or too slobbish. I didn’t like it either way. Again, what am I to make of all of this? I don’t know, and I don’t like it.

I still like how gross and weird the comic is as a whole, but I wish the creators would let me know one way or the other if they are shitheads so I can either keep going with a clear conscience or abandon the series entirely.

Has anyone else read this and do you have thoughts on these matters?