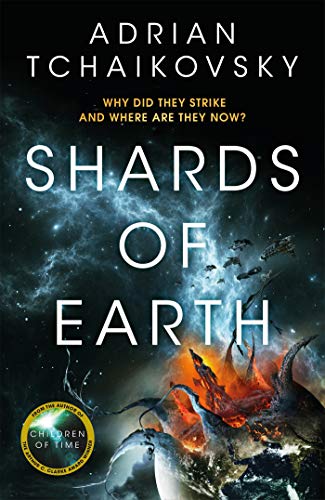 This is the 4th book I’ve read by Tchaikovsky and I admit I’m now a total fan. Shards of Earth is probably the most fun, fast paced book of his I’ve read. As with his other books, there is extensive world building,  in depth alien biology and the threat of multiple worlds dying unless humanity gets its act together. I thought he was brilliant with Children of Time and its sequel, but he’s grown even better in this novel. A greater sense of character development and the relationship between characters makes this books heavier ideas easily understood. He anchors his typically deep ideas in the daily lives of people, showing and not telling, which makes some of his mind and space bending ideas flow more easily than in previous books. I can’t pretend to undderstand all of it but I never felt lost. A found family manifests in a multi species group aboard a salvage ship loyal only to its crew, trying to not only navigate space but the politics of several worlds while everyone is under threat by a moon sized alien intelligence capable of rendering entire planets into genocidal artwork. The plot moves along fairly quickly, zipping around worlds visited by the crew of The Vulture God salvage ship who are either fleeing or fighting their way across the galaxy. The characters are wonderful- funny, witty and diverse and touchingly loyal to one another despite being truly alien to one another. The way the book ends strongly suggest Tchaikovsky has a sequel in the works and I can not wait to read it. Highly recommend