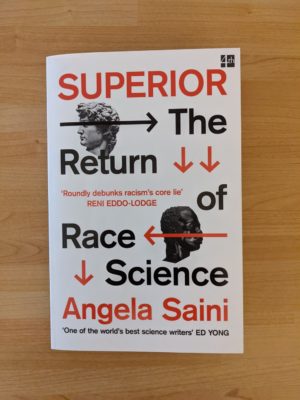 Best for:
Those interested in the history of science used in support of and to further racism.

Worth quoting:
(I tried to narrow this down, but there’s so much good in here)

“Because of the narrow way Europeans had set their parameters of what constituted a human being, placing themselves as the paradigm, people of other cultures were almost guaranteed not to fit.”

“The idea of race didn’t make people treat other people as subhuman. They were already treated as subhuman before race was invoked. But once it was invoked, the subjugation took on a new force.”

“Scientific racism has come out of the shadows, at least partly because wider society has made room for it.”

“The true human story, then, appears to be not of pure races rooted in one place for tens of thousands of years, but of constant mixing, with migration both one way and another.”

“The desperate hunt for ‘black genes’ reveals just how deeply even well-meaning medical researchers believe that racial differences in health must be genetic, even when a goldmine of alternative explanations exists.”

“Enjoy your culture or religion, have pride in where you live or where your ancestors came from if you like, but don’t imagine that these things give you any biological claim.”

Why I chose it:
The author gave a remote talk at my workplace (I work at a University).

Review:
This book is dense yet extremely readable. Author Saini organizes it chronologically, so the reader gets a real sense of how ‘race science’ has evolved over time. She focuses on how it has changed to provide the racists with different avenues for trying to prove their belief that there is a biological difference among races, and further, that those differences mean that some people (usually whites) are superior.

Saini covers so much ground that I’d be doing a bit of an injustice to try to summarize it all here. But her basic premise, which she backs up repeatedly with not just source material but with interviews with some of the offenders, is that racists have made use of science for decades to try to support their ideas of racial superiority, when in fact there is basically no evidence for the concept of race to be found in biology.

I found the history extremely interesting, but I was especially taken with the discussion of the focus specifically on genes, and how genetics has played into and furthered some racist ideas about biology. And the chapter called ‘Black Pills,’ about how medicine has suggested a biological difference in disease treatment and process that could be much better described looking at sociological factors, was fascinating and frustrating.

Saini doesn’t just present the facts though, she also explores what all of this means for us as society, when some people are so desperate to feel superior that they seek to misuse science. I think we are getting closer as a society to understanding that science is yet another area that is not free from bias; this book makes it extraordinarily clear.