So it’s been a while, but it’s never too late to try and get back into the swing of things. Every year is a new opportunity to try and do the Cannonball Read.

I started out with a book by British poet John Cooper Clarke. I’ve seen Clarke several times as the Dictionary Corner guest on 8 Out of 10 Cats Does Countdown, and I always really enjoy him. It took me a while to get one of his books, though, since it seems that his focus is mostly on spoken word performance rather than published work. This turns out to make a lot of sense because his poetry absolutely BEGS to be read aloud. There is something about his word choices and the way he strings them together that I find extremely enticing. 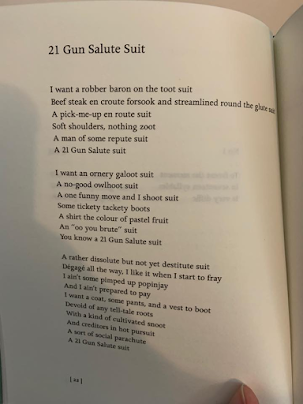 The poem above, for example–the sound of the line “A rather dissolute but not yet destitute suit” and the way those words work together, combined with the repetition of the “oot” sound throughout is fantastic. Briscoe was not as impressed with my renditions–I will admit that my attempts at Clarke’s accent were a massive failure–but I found speaking the words out loud really enhanced my experience.

Not all the poems are as good as this, of course. There are one or two that read as mildly homophobic or transphobic (nothing outright, really, but I noticed regardless) and some that I maybe don’t get because they’re more specific to Britain. However, for the most part, I enjoyed this little book quite a lot. His sense of humor is biting and slightly dark, which suits me right down to the ground, and his way of playing with language is just…fun.

On the whole, I’d recommend this to anyone who enjoys modern poetry, though I’d also suggest searching out some recordings of him performing his own work as well, since that’s the way it’s really meant to be consumed.

I’ll end with one of his haikus:

To freeze the moment