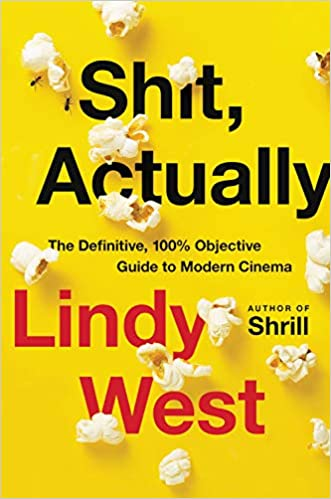 Not all of the jokes landed for me, but most did! I found myself arguing with her about some things, but also agreeing with a lot of it. (I like Love, Actually! I do, can’t help it.) Mostly I was just very entertained.

Take this excerpt from her Lion King essay:

“So then [Scar] decides to just murder Simba and resume his position as Mufasa’s number two. Say what you will about Scar, but when the dude has an idea, he commits. Simba isn’t just a baby, he’s a KITTEN. Can you imagine if there was a kitten that was also your nephew? The only thing less murderable than that would be if, like, the knowledge of how to make chocolate chip cookies only existed in the mind of a mini-horse that was also your grandma.”

There are many such salient points in this essay collection.

Because am exactly the demographic Lindy was aiming for, I had seen most of these movies, only missing out on two: Face/Off and The Rock. I decided to watch Face/Off over the weekend before reading her essay on it, and while that movie was ABSOLUTELY BONKERS I think I made the wrong decision because I will never get the image of a lady sucking on Nicolas Cage’s tongue out of my head. Plus The Rock is currently free on Hulu and I paid $4.26 to watch Nicolas Cage and John Travolta literally have their faces pulled off from their bodies!!! It was disgusting.

And the essay on The Rock was actually one of my favorites.

I will end this non-review by stating my agreement to Lindy’s thesis from the essay on Top Gun, which is that Iceman is treated like the villain in this movie even though everything he says is reasonable and right, and that Maverick was the real villain all along. I believe that.