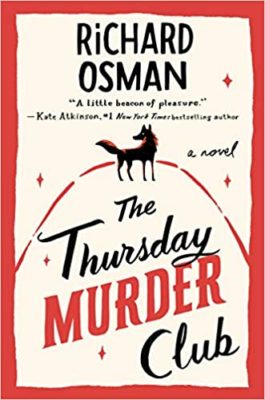 Richard Osman is omnipresent on British TV as a host of one quiz show and the co-host of another. He is also a frequent guest on comedy panel shows. He’s always impressed me with his quick wit and intellect, so when I heard he had written a novel, and not just a novel but a runaway bestseller in the UK, I was intrigued enough to purchase it.

The premise is not one that would normally appeal to me. The titular club is a quartet of senior citizens living in a retirement community who look into cold case murders for fun. Their leader is Elizabeth, a hyper-competent woman who traveled the world in some clandestine employment for the British government in her younger years. The other members are Ron, a former labor agitator, Ibrahim, a psychiatrist, and Joyce, a nurse whose diary entries make up some of the chapters.

When someone of their acquaintance is murdered, the Club shifts focus and decides to lend the local police their assistance, however unwanted it may be. The foursome enjoys taking advantage of people’s natural sympathy for the elderly, worming their way into the confidences of the investigators by pretending to be confused or harmless. Osman has a good deal of fun with these scenes and wrings them for maximum comedic value.

For a first-time novelist, I was impressed with how capably and efficiently Osman was able to humanize his characters. Each of the Club has a distinct, recognizable personality, as do the two principal police officers assigned to the case and several other supporting characters. If there’s a quibble to be had with Osman’s writing, it may be that he tries to do too much. The central case branches off into several avenues and each of results in the revelation of a deep, dark secret. It’s a lot.

However, to give him his due, the central solution is a real winner. It comes as a surprise but makes sense in retrospect as all the best solutions should. All in all I enjoyed spending time with the members of the Thursday Murder Club, and I look forward to their next adventure.