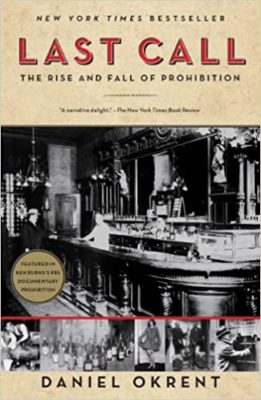 In January 1920, the 18th Amendment went into effect, prohibiting “the manufacture, sale, or transportation of intoxicating liquors within, the importation thereof into, or the exportation thereof from the United States and all the territory subject to the jurisdiction thereof for beverage purposes.” Daniel Okrent describes how it came to this point, and what happened during the 13 years it was in place.

This is a very well-researched book with tons of facts about the era and the people that were most involved in the issue. I was really looking forward to reading it because I am not all that familiar with the ins and outs of that time, but in the end, unfortunately, reading this book was just an exercise in frustration. It is an agglomeration of numbers, names, and facts that were just arranged one after the other, but without a central theme that turns all of them into a compelling and coherent narrative. It does not help that Okrent seems mostly concerned with the political side of things, but that there is almost no mention of the social and cultural impact, which makes the whole thing bloodless at the best of times, a slog at the worst.

And that’s a shame because there are a lot of colourful personalities involved, from mobsters to suffragettes, and from presidents to brewers. There are also a lot of interesting facts; it is just mind-boggling, for instance, that feminists and progressives would team up with racists and even the KKK just to get prohibition underway. How did these women fighting for their rights feel about their strange bedfellows? Unfortunately, we learn nothing about that. There were also issues with the representation of votes in Congress which was exploited by those who wanted to force a minority cause on the majority. This is very reminiscent of today, and herein also lies the biggest problem I have with the book. History is of such importance because no event or era stands as a monolith, and we have to look at the bigger picture in order to learn from it.

If Okrent wants to focus on the political side, he could have easily drawn a parallel to today’s political discourse, single-issue politics, or the influence of lobbying groups, for example. But he does nothing like that, and so it never rises above a bunch of facts and some entertaining anecdotes that are too few and far between to make a difference. He states that prohibition overall was a failure, and that it led to criminality, institutionalized hypocrisy, and pervasive corruption, but which conclusion can we draw from that? Where is the analysis, and which point is the author trying to make? Sadly, we have to puzzle it out ourselves.

In its own way, it is an educational book, but certainly not an enlightening nor an entertaining one. Decades after the end of Prohibition an infamous Canadian provider of liquor answered, when asked about his role during that era, “You people were thirsty.” Well, after reading this book I am thirsty, too, because it is truly unfathomable how such a wild era could inspire such a bone-dry account.