> FAQ Home
> Genre: Fantasy > I never actually wrote a review of this, so here are some thoughts I typed up to a Goodreads friend instead. 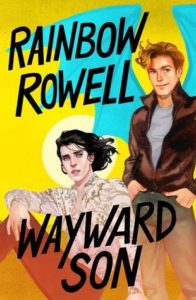 I just never got myself together enough to write more than “THOUGHTS” as a review on Goodreads, so here are some disjointed notes (edited for clarity) I sent over to a Goodreads friend instead:

1. In response to everyone going into this book assuming it was a duology: I thought about this, too, but ultimately it doesn’t bother me too much. I had been going in expecting this to be the end of the story as well, and it very much wasn’t. Maybe on a second read, I would be prepared to expect the non-resolution and catch more of what she was going for.

Anyway, maybe there will be another book after that, to keep going with the Queen theme instead of Kansas. (I wrote this the week the book was released, before the third book was announced.)

2. I haven’t been thinking of Wayward Son as it’s own thing, so it didn’t seem like traditional YA to me. I don’t think you can separate it as a reaction to Carry On, and I think it’s natural that the two books will feel different and have different purposes. As a sequel to a fantasy book it is very much not what you would expect. It’s all about the fallout from the supposed happily ever after. What does it really look like to experience a traumatic event like Simon did, even if he did win in the end? Winning doesn’t mean he doesn’t have trauma, and winning and acknowledging his love for Baz didn’t magically fix his underlying issues. It just left a hole in his mind. He has the same problems, plus trauma, minus a purpose and sense of identity. That she chose to make that the story fascinates me. I think summing all that happened up as teenage angst is doing it a little bit of a disservice.

3. Penny bothered me too, a little, but then again, I was never really able to get a handle on her in the first book. She was just the hypercompetent one that had everything figured out. I liked that she was so flawed and human here, and I think it will be interesting to re-read Carry On in the future, knowing that along with her brains and other strengths, her weakness is that same confidence, not stepping outside of herself and considering that she might be wrong, and learning to be okay with that.

4. I wasn’t fully happy with Simon and Baz here either (I tried not to have expectations, but I still think I did anyway a little), but I didn’t *not* like it (and I wasn’t bored). I found most of it to be really poignant as character studies. I think the main point of this whole book was to show how their flaws are pulling them apart, and to show (via the geographical cure) that they have a long way to go if they want to have a functional, healthy relationship. Simon is a legit mess, and until the end, wasn’t willing to face it. He’d rather either wallow on the couch avoiding therapy, or escape via adventure and fighting. I liked that Baz in contrast had been finding himself over the last year, and though he isn’t great at communicating with Simon, his self-hatred has mostly dissipated. I thought the scenes with the vampire dude were really poignant, how they showed him as this sad (in a not romantic way) lonely child who is cut off from the vampire community of people he might learn things about himself from, and from the magical or Normal community by being a vampire. I like that he is choosing to find a way to merge those identities.

I think the more I think about the book the more I like it, but I’m going to have to re-read it. Mostly I just wish there had been one more scene tagged on at the end to give it some sort of emotional closure, but if we’re going to be getting a third book soon then that complaint isn’t as strong . . .