Let me be clear — I read these ages ago. And I’m writing a review for them months after the fact. So this will not be the best/clearest/most coherent reviews for a truly awesome series, but I’ll do the best I can.

… who drop into the fleeing couple’s ship unannounced. Marko and his mother immediately take off to a different planet to retrieve their “babysitter”, the ghoul Isabel, while Alana is left with his dad — her now-father-in-law.

It also introduces Gwendolyn, Marko’s ex-fiance who gifted him with the translation engagement rings that Marko and Alana use to communicate. She drops in on The Will, a freelance bounty hunter/contract killer who is despondent now that his ex was killed by the Prince. She is eager for him to finish the job he started — hunting down Marko and Alana, but first The Will insists on rescuing Slave Girl, a young child he saw on a sex planet.

There are many things to love about Saga — the art, the humor, the absurdity of some of the space creatures — but the plotting is really amazing. Weaved in between the present narrative is how Marko’s parents raised him, and how he and Alana met and fell in love. The authors use an omniscient voice — Hazel, the daughter — to set the stage, and her wry voice is used to set the tone. It is also ominous at times, piquing our worries on what’s to befall our heroes and their accidental family.

There are also great moments of reality snuck in. Like how The Will wants to return Slave Girl to her planet after she’s rescued, but Gwendolyn hits back at him with some common sense. “Home? To the same people that handed her over to those assholes?”

“Then to a shelter or something,” he says lamely.

“Those are just recruitment centers for the other side’s cannon fodder,” she says, before urging him to think about counseling for Slave Girl’s abuse.

That’s what I like — a world where not everything is definitely good or definitely bad, and where the supposed heroes are as befuddled as we are about what steps we should take next. All we can hope for is to do the “best” thing, and that completely depends on whose point of views we’re aligned with.

The fugitive couple arrive in Quietus, the home of the author Oswald who wrote a subversive book that enabled them to fall in love.

There’s honestly so much to love about this issue — the introduction of the writer and the wink-wink-nudge-nudge meta content about creatives, the hiatus the runaway family gets before Prince IV drops in on the planet, and the introduction of journalists chasing down the truth of the story.

But I think perhaps the single best page in the entire issue is when Slave Girl — now renamed by The Will as Sophie — chats with Lying Cat (who is one of my favorites). 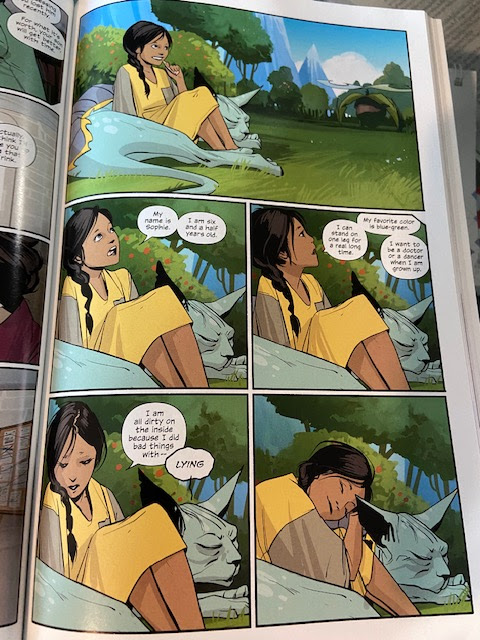 She also calls him “Honest Cat” which is just perfect.

The journalists — who are like teal-coloured water creatures — are getting closer to the truth that Marko and Alana might have fallen in love, but the Power that Be don’t want this coming out, so a contract is put out to kill them. But the freelancer sent after them is The Brand, The Will’s sister it turns out, and she decides not to kill the journalists because she felt they were “pretty fair to the union during our last strike”.

Instead, she poisons them with a spell that kills them if they tell a single soul about the story.

“That makes no sense,” said one of them “We’ve covered way worse crap done by both sides.”

“Exactly,” she says. “It’s the stories with no sides that worry them.”

This volume ends in tragedy — and it’s quietly foretold in the deepening relationship between Oswald and Klara, Marko’s mother. Why can’t these people ever have anything nice?

Side note: I wish I could pull of Gwendolyn’s all-white tube top/shorts/blazer look in real life. I mean, look at it.

… drops us in Gardenia, a planet where the family has decided to stay for a while so that Alana can join the Circuit, which is a little bit like an acting troupe that everyone in the galaxy can plug into. This might have been one of my least favorite issues, probably because there are less interactions between Marko and Alana, who’s slowly getting warped by the long hours of her job.

She also starts taking drugs to get by, and it’s sort of strangely the most “normal” part about the series so far. Woman has shitty job she needs to keep, woman takes uppers to make it bearable.

It also shows Hazel becoming a super cute toddler, and Marko being a full-time stay-at-home dad who’s slowly getting enamoured by a fellow parent.

Meanwhile on the Robot planet, there’s turmoil afoot. So far, we’ve only encountered the royalty robots, but there is also a “commoner” class, and one of them is itching for a revolution. His young son who cannot be treated because he has no insurance dies from diarrhea, so he kidnaps the son of the Prince Robot IV, kills the wife, and makes off with the baby TV screen. His aim is to broadcast a message of the plight of the commoner to all the galaxies, so he heads to Gardenia to jump on the Circuit’s broadcast.

Sophie and Gwendolyn are still trying to track down a cure for The Will, and they run into his sister, The Brand, who’s intrigued by their “quest”.

And there you have it! Three reviews in one post! I can’t wait to read the rest of Saga — just gotta get my hands on the issues.