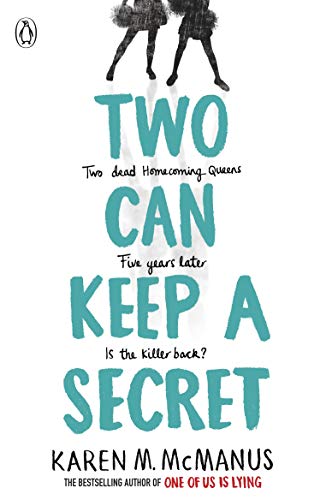 Before I write the review for Karen M. McManus’ new book Two Can Keep a Secret, I want to urge everyone to check out her first book: One of Us is Lying, which was one of the best books I read a few years ago. Tightly plotted, with a great solution, and characters that actually felt like real teens. I absolutely loved it and highly recommend it to anyone who likes YA and mysteries/thrillers. Because of the category, I’m tagging this as my #Youths! bingo square.

Or maybe you want to read Two Can Keep a Secret first, because it’s not quite as good as One of Us is Lying. It’s still great, though–the best thriller I’ve read this year.

The plot centers around two teens in Echo Ridge, VT–a sleepy little town where girls go missing, and sometimes end up dead. After her mother’s breakdown, Ellery and her twin Ezra go to live with their grandmother, who still lives in Echo Ridge despite the fact that one of her daughters–Ellery’s aunt, her mother’s twin–disappeared there twenty-odd years before at age sixteen, the same age Ellery is now. Ellery is fascinated by true crime, and hopes to find out more about her aunt’s disappearance and the murder of a homecoming queen five years before.

You might think the other main POV would be Ezra, but it’s not: it’s Malcolm, younger brother of the boy who was implicated in the murder of above homecoming queen, but never charged. Doubt lingers around Malcolm’s family, even after his mother’s remarriage to one of the richest and most respected men in town.

Mysterious messages begin appearing in Echo Ridge, threatening the new potential homecoming queens–and then Ellery is chosen as one of them, despite only living in Echo Ridge a few weeks. Ellery and Malcolm team up to try to solve the mystery.

The best part about the book is the way that McManus cleverly plays with some of the YA cliches. For example, Ellery being made a homecoming potential queen isn’t some ‘omg the heroine is so amazing and popular’ thing; it’s actually part of the plot. Huge spoilers follow for the rest, so I’ll white them out in case you want to keep guessing: not all the popular girls are Plastics, the police aren’t all as incompetent as they seem, and the best one–Ellery actually pretty much sucks at solving mysteries!

The solution to this one wasn’t as great as McManus’ first endeavor, but don’t hold that against her too much: this is still a really well-plotted thriller. I read it in about a day and loved every minute of it. Minor quibble: Ezra was gay, which was great for some LGBT+ rep, but he was actually a pretty useless character aside from that. I wish he’d been given something actually important to do instead of just being Ellery’s twin. Other characters were more well-rounded and had more screen time.