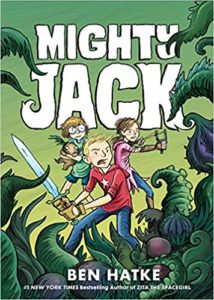 Jack is a normal teenage boy who would like to sleep in during the summer.  But he can’t, because he has to mind his sister, Maddy, who is nonverbal and on the autism spectrum.  Their mother has started working a second job to pay the bills, because they are in dire financial straits.  At a flea market, a mysterious stranger offers them strange seeds. Maddy speaks, and tells Jack to buy them.  The price is the family car, which is not pleasing to their mother. But the seeds are worth more than a car.

The seeds change the lives of Jack and Maddy.  They work together to plant them, and what grows is not what they expect.  The plants are not normal plants, because they walk about and bite and fight.  Some are affectionate, like the onion babies. And some are obviously intelligent.  But some need to be taken down.

A neighbor, Lilly, comes and finds out about the garden.  Jack is a bit flirty, and listens to Lilly probably more than he should.  He does learn some valuable skills from Lilly.

Reading this after Zita was a treat, because I recognized some characters!  This was written after Zita, so I’m assuming it takes place after, but I’m not sure.  I’m not sure what those characters were up to, though.

I really like this, except for the character of Lilly.  I don’t like her. I think she’s manipulative and mean, and is no good for Jack and his sister.  She can be nice at times, but also takes advantage of the siblings.

Mighty Jack and the Goblin King 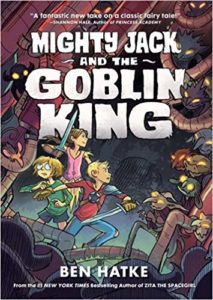 Jack and Lily have to go on a mission to save Jack’s sister Maddy.  But things get very intense very quickly. The two are obviously not in Kansas (or wherever they live) anymore.  And they get into very real danger.

The two split up, so we get to see twice the amount of characters!  We see some old friends from the Zita stories and the first Mighty Jack book.  We also get to meet the goblins, who are adorable.

So, Lilly steps up in this.  Maybe she knows she wasn’t the best of people before, and the stakes are much higher now.  Although if everything had been up to her in the beginning, she would have given up. She is also not very trusting (and rightly so.)  But something changes, and she realizes that other people are counting on her.

It’s in this book that we get to see some of the more traditional aspects of Jack and the Beanstalk.  Some of them I didn’t notice in the moment, and only when I went back through did it occur to me that it was part of the fairy tale!

This second book in the series is definitely darker than the first, with more violence and consequences.  The first dealt with defeating ambulatory plants, but here there are more sentient creatures. Nothing too extreme, but there is a difference.

The Epilogue has a teaser for the next book, which is a crossover between Jack and Zita.  It’s going to be a wild ride!

This fulfills the CBR 11 Bingo category of “Illustrated”