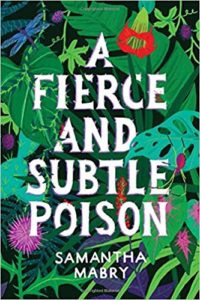 Lucas spends his summers on Puerto Rico, housed up in the resort his father owns.  The two don’t get along, but Lucas is able to escape by spending time with his friends on the island or romancing the girls there.  Mostly they all just horse around, and trade tales that the residents gossip on: like the house in town that’s supposedly cursed, and the scientist who lives there, and the daughter he hides.  The story of this family has transcended local gossip into local legend: some say the girl’s touch can kill; some say the girl can grant wishes – and Lucas isn’t the only one who has thrown a wish over the wall.

But maybe the curse is real, and maybe it’s broader than just the scientist and his family. Recently, young women have started going missing in Old San Juan. No one seems to pay any mind to it until a visiting American girl disappears and then washes up dead on the shore.  This mystery becomes more personal when a local girl Lucas has been romancing disappears, and her younger sister soon after. And to raise further intrigue, Lucas wakes up to find that his wishes to the girl with the poison touch have returned to him – and the girl has written back.

I’ve coveted this book for a long time because the cover is so gorgeous and makes you want to literally dive into it.  I finally read it for the 24in48 Readathon last weekend.  And . . . it was ok?

It was highly readable – especially if you’re into quiet, literary magical realism like Bone Gap or The Accident Season.  But the book feels like a Tennessee William play or another old classic set in an exotic locale, marinating on the feelings of a sad rich boy. This is confusing, as the author is a woman of color, and could have chosen to tell the story from the point of view of Isabel (the scientist’s daughter).  The author could have chewed on some of the same themes (how men like to control women — how crime only makes headlines when a white girl is the victim) with a more interesting and diverse narrator.  As it is, it feels like another “rich white boy learns a lesson” book, which is too bad.