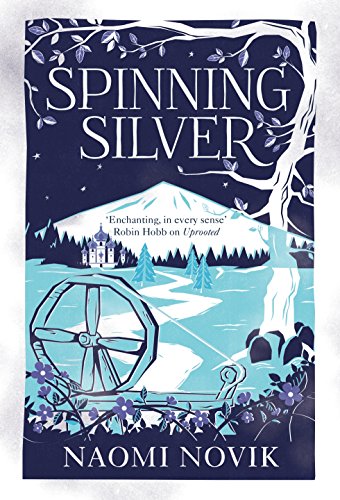 Before this week, if you had told me that one of my favourite fantasy books I’ve ever read would be a retelling of Rumpelstiltskin of all things, I would have laughed in your face.

But that is one way to describe Naomi Novik’s Spinning Silver, her follow-up to Uprooted (which was far and away one of my favourite books from a few years ago). Tonally, Spinning Silver is similar to Uprooted. Both feature a non-traditional European fantasy world, in that the Polish grounding for Uprooted and the Slavic folklore for Spinning Silver aren’t as common as Vikings or Regency or knights in armor. Both feature the kind of female heroine you want to root for, who don’t sit in a tower and wait for a prince to rescue them. And both owe their most basic premise to fairytales.

Uprooted at first blush seemed like a ‘Beauty and the Beast’ retelling, but of course its charm was that soon it left its origin story behind. It is not only the title of Spinning Silver that evokes the Rumpelstiltskin tale, but with some tonal echoes of the older versions of Cinderella (the one without a fairy godmother, but with a magic tree instead).

Miryem is the daughter of a Jewish moneylender in a small rural village, but her father is too kind to be very good at his job. Miryem, tired of being cold and starving, has no such compunctions. To save her sick mother, she takes over the family business and begins to demand payment from her debtors. Her success is so that she wins the approval of her maternal grandfather, a wealthy and respected moneylender in the nearest city, although her parents seem distraught at Miryem’s business sense. When Miryem, in a fit of anger, tells them that she can turn silver into gold, it catches the attention of the Staryk–elven creatures who rob the country for gold and leave winter in their wake.

Miryem is not the only character whose story is told, however. Two other women are important for the narrative. One is Wanda, whose mother is dead and whose abusive father terrorizes her and her two younger brothers. Wanda is sent to work for Miryem to pay off her father’s debt, and hopes to be able to gain safety for her and her brothers. The other main character is Irina, whose father hopes to marry her off to the tsar–whereupon she discovers the tsar’s terrible secret.

I would not say that this novel is a perfect one. My problem with Uprooted was that there was a change of location and a change of plot-goal halfway through that felt jarring. There is no such difficulty with Spinning Silver; the plot is smooth and all the subplots feed into each other marvelously. But there were some storytelling choices I wish had been done differently. (Minor spoilers follow, but nothing to give away any major plot points.)

If the number of POVs had stopped with Miryem, Wanda, and Irina, I think the book would have been stronger for it. But unfortunately it added several extraneous characters, particularly Stepon (Wanda’s youngest brother) and Magda (Irina’s old nurse) and even a few scenes from the tsar himself. This is a pity, because I think Wanda and Irina’s storylines would have been stronger if they had borne more of the burden of telling the story. Inexplicably, some of the most important scenes in the book are told from the perspectives of Stepon and Magda, when it would have been much more interesting to learn of these events through Wanda and Irina’s eyes. The other problem with the multiple POVs is that they were all told in the first person. This made for a jarring switch, and I think this book would probably be a headache to read as an audiobook (unless they have different voices for the characters–I’ve just checked, and it doesn’t look like this is the case). Some POVs, like Stepon’s, were written differently enough that one could tell who it was, but most of them I had to actively look for clues.

Although Wanda’s POV did not provide the most thrilling parts of the story, it nevertheless was arguably the soul of the story for me. It is through Wanda’s storyline that the Cinderella threads are woven. There is a magic Staryk tree behind Wanda’s cottage, where Wanda’s mother and her many children who died in infancy are buried. The tree gives them advice and protection and love, as much as Wanda’s mother can pass on from her grave, and when they are forced to leave the cottage, the tree gives them something of itself to carry with them. But even more touching than this is the way that Wanda and her brothers find love and affection from a source they would never have dreamed. In my eyes, the true heroes of the story are in fact Miryem’s parents, who love not only their daughter but have enough affection left over to bestow upon those starving for it. Part of Uprooted’s charm lay in the friendship between Agnieczka and Katya. Much of Spinning Silver’s is in the importance of family and of belonging. The latter is a theme made even more poignant by Miryem being Jewish–something I absolutely loved. This identity worked perfectly with the story and with her character, without ever feeling tacked-on or beside the point.

I enjoyed both Miryem and Irina’s storylines very much, and was always excited to get back to each character after some time in different POVs. Both characters are excellent heroines with different strengths. I did think that the romance wasn’t as well done here, especially compared to the excellent slow burn romance of Uprooted, which contains the steamiest but not-overly-graphic sex scene I have ever read. I actually found Irina’s to be the more interesting of the two.

I have been somewhat critical in this review, but I cannot fully convey the sheer enjoyment I experienced while reading this book. I am lucky I didn’t have to work, because I read while eating, while brushing my teeth, and while I should have been copy-editing my poor husband’s manuscript. It is a cliche to say that I devoured this book, but I did so as insatiably as the Slavic demon Chernobog consumes the souls of the living.

Because Chernobog is in this book as well. Nothing makes a plot race like having a fire demon on one side and the winter elves on the other. In some ways, this was tonally very like Katherine Arden’s Bear and the Nightingale (which is also great) but the plots were nothing like each other.

I think if I were being honest, I’d give this 4.5 stars. I’m still caught up in its magic, though, so it’s 5 stars from me, along with a fervent recommendation to give this book a try.