“The thing about a spiral is, if you follow it inward, it never actually ends. It just keeps tightening, infinitely…”

It’s hard to believe that The Fault in Our Stars came out five years ago! I didn’t even realize how much I missed John Green until I started Turtles All the Way Down. Maybe I never mentioned this before, but I love John Green. All of his books are fantastic, as you can see from my reviews of: The Fault in Our Stars, An Abundance of Katherines, Will Grayson, Will Grayson, and Paper Towns (I have also read Looking for Alaska-actually, that was my first John Green, but I haven’t written a review.) I think I say this with every book, but Turtles All the Way Down is the best one yet.

The main story focuses on Aza Holmes. Her best friend Daisy decides that they should team up to find missing local billionaire Russell Pickett after he flees his home to avoid embezzlement charges. There is a $100,000 reward for any information leading to his capture. Daisy wants them to get that reward, and the first step in the plan is for Aza to reconnect with her old friend, Pickett’s son, Davis.

Aza and Davis reconnect so well that they begin dating. The entire time, Aza keeps looking for his father, even after Davis gives them money to stop investigating. She made a promise to his preteen brother that she would find their father, and she intends to keep that promise.

The less dominant, but always present, part of the story is Aza’s mental illness. She suffers from anxiety and OCD. Her disease causes her to obsess over getting Clostridium difficile, or C. diff, a type of bacterial infection. These intrusive thoughts lead her to constantly opening a callus on her finger, forcing the blood out, changing the Band-Aid, then repeating the whole thing over again.

Rather than romanticizing her mental illness, Green shows how Aza’s disease hinders her detective work. He also touches a bit on the subject of drug treatment. Aza is often called out for not taking her prescribed medications. She claims that they make her less like herself. At his lecture, Green stated that he fully believes in medication to treat mental illness, that they can and do help sick people live their lives. In fact, Aza skipping her meds is part of what leads her into a downward spiral.

What I also liked about Turtles All the Way Down is how the story focuses on Aza. I keep thinking how if it was told from Davis’ perspective, it might have been a lot like Green’s previous male-narrated stories. She might have been cast as the manic pixie dream girl (Though to be fair, I’m rethinking that term). It’s a book that shows one girl’s struggles with mental illness. Personally, I have struggled with anxiety and depression, and could definitely relate with Aza. I definitely understand the desire to have a normal brain instead of a malfunctioning one. It’s a meaningful story told with Green’s signature style and wit, and I loved it.

Bonus:
Here’s a picture of my own personal copy of Turtles All the Way Down with all of my favorite parts/quotes marked: 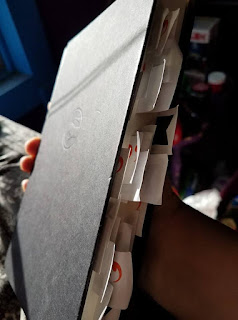 Also, I had the opportunity to attend John Green’s promotional tour in October. You can read about it here.