> FAQ Home
> Genre: Fantasy > Engaging continuation of an epic fantasy that addresses some of the first’s flaws 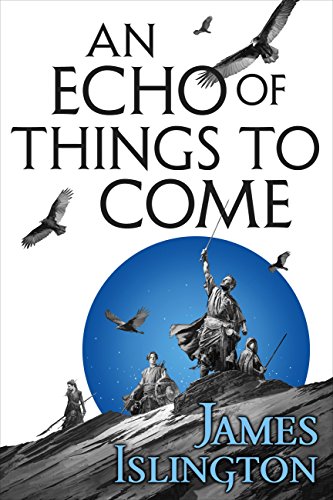 So I have read a few books since my last post but haven’t written anything up–been too busy finishing my PhD thesis. But it’s submitted, and it’s Christmas, and I am determined to at least ‘officially’ make my half Cannonball goal before the year’s end. So I’m going to write up a few reviews.

I devoured An Echo of Things to Come, the sequel to The Shadow of What Was Lost, which I reviewed earlier this year. This first book introduced a world where the magic users, the Gifted, were overthrown in a war which also destroyed the Augurs, the magical leaders whose powers differed and were greater even than the Gifted. Now, the Gifted are bound by the Tenets, rules which inhibit their powers and make sure that they do not gain political control again, for the Gifted are feared and disliked by many. But an ancient evil threatens, and the Gifted and others must endeavor to defeat it. Some spoilers for this first book follow.

I quite like the main trio of the main characters–Davian, Wirr, and Asha–and I think their storylines continue well in Book II. Davian, who discovers he is one of the few remaining Augurs, joins up with other secret Augurs–some not as nobly-minded as he–and develops his powers. Wirr, one of the Gifted, is having trouble reconciling his powers with his position as the Northwarden, who is in charge of controlling the Gifted. Asha, a Shadow (a Gifted whose ability to use magic has been removed), is ostensibly an assistant politician, but is also delving into the secrets that threaten them all.

My biggest problem with the first book was the character of Caeden, who–spoilers–turns out to be a reincarnation of a basically immortal man who many remember as a figure of great evil (think Jordan’s Lews Therin). But ‘Caeden’ is not, and he needs to figure out why he wiped his memories before his reincarnation, what his great plan was/is, and if he truly was the evil man that people think he was. I thought Caeden was the worst part of the first book, and while I still think he is the weakest link of the POVs, his storyline became much more interesting this time around, as Caeden begins to regain his memories, meet other immortal beings like himself, and put the pieces together.

I guess my actual biggest problem is that, while I usually am amazing at remembering the complicated elements of fantasy series, a lot of Islington’s worldbuilding goes in one ear and out the other for me–and I don’t know why. I don’t think it’s his fault. There’s a lot of comparisons made to Jordan and Sanderson, and while Islington doesn’t really try to stretch the boundaries of epic fantasy, that isn’t necessarily a bad thing–if you like epic fantasy, this is a really good read. I don’t think that it reads as a ripoff of Jordan, at any rate. (For one thing, he can plot way better than Jordan can.)

I am definitely looking forward to the third (and final) book in the Licanius trilogy, and I think Islington’s abilities as a writer will also grow between this book and that one.