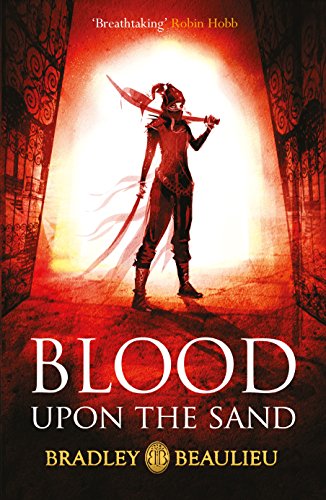 I’d been in a bit of a reading funk with my fantasy choices, recently (see my last review), and settled down to read this one mostly because I’d preordered it last year and it had been on my kindle app for a few months already. I’d liked the first book in the series, Twelve Kings in Sharakhai well enough, but didn’t feel a desperation to continue with the series. I’m glad of that, actually, because this one pulled me out of my fantasy fatigue.

One should definitely read Twelve Kings first; this isn’t a series you can read out of order. Since I read the first book last year when I wasn’t writing Cannonball reviews, my brief synopsis will be more an introduction to the series rather than to the second installment. Sharakhai is a city ruled by twelve despots, who rule the city and the desert around with an iron fist and through the will of the gods, aided in their tyranny by their warrior daughters, the Blade Maidens. Çeda’s mother was killed trying to assassinate one of the kings, and Çeda has made it her goal to avenge her mother’s murder, though she is not sure that she approves of the methods of the resistance movement, the Moonless Host. Çeda uses her fighting skills and ingenuity to infiltrate the palace, but as she does, her best friend Emre becomes entangled with the Moonless Host’s rebellion.

Much of the plot of Twelve Kings continues straightforwardly in Blood Upon the Sand, but despite that, it doesn’t fall prey to ‘second-book’ syndrome. If anything, the stakes are higher and Çeda is more prepared to pursue her goal of murdering the eponymous twelve kings. Emre is also a POV character, providing insight to the increasingly disturbing methods of the Moonless Host to overthrow the kings. Another POV character, and one that I find most interesting, is that of Ramadh, a foreign emissary to Sharakhai who becomes entangled in the plot through his own desire for vengeance against the leader of the Moonless Host, who killed his wife and daughter.

One of the best things about the series is the worldbuilding. The pseudo-Middle Eastern desert setting feels fresh, and the mythology that Beaulieu has created is very interesting as well. The magic system is mostly ‘blood magic’, which has horrifying consequences for many of the characters; this is something that is ramped up in the second book.

If you like epic fantasy but are tired of Game of Thrones (I say this like I wouldn’t drop everything in my life to devour The Winds of Winter if it EVER comes out) then I highly recommend this series. It has everything you could want: kick-ass women, intricate worldbuilding, and a pretty engaging plot.

A side note: The titles I think are slightly different in America and the UK; unsure about Europe, etc. If you’re interested but are having a hard time finding them, just keep that in mind.