> FAQ Home
> Genre: Fantasy > The sort of book I would have liked more had I read it 20 years ago 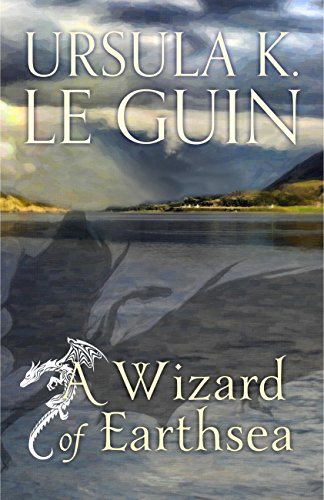 I’m giving this book 3 stars, and I feel guilty about it.

I feel guilty because I know it’s a classic, because it’s 50 years old and still going strong, because the writing is really beautiful, and because I KNOW that if I had read this 15-20 years ago, I would have adored it.

8-13 year old me, who reread books about Narnia and Prydain and various retellings of King Arthur legends year after year (and read a crapload of mediocre Catholic historical fiction in the meantime) would have appreciated it for what it is.

A Wizard of Earthsea is about a boy named Ged (originally called Duny *snigger*) who turns out to have pretty super-duper wizard powers, gets pretty puffed up about it and goes to wizard school, where he decides that a rich kid named Jasper is making fun of him so Jasper becomes his enemy. Ged also tries to show up literally everyone else in the school. (It’s basically Rothfuss but without all the shitty fairy sex and the obnoxious disappearing girlfriend. And I wasn’t even sure if Jasper disliked Ged before Ged was an asshole to him, unlike Kvothe’s enemy whose name I can’t remember.) In an endeavour to best Jasper after years of constant competition, Ged basically summons a spirit from the afterlife. The rest of the book follows his attempts to escape/hunt down this shadow being (AND EFFING JASPER IS COMPLETELY IGNORED. AFTER ALL THAT.)

It was a quick read; I read like 1/3 in an afternoon. And I kept on reading, so it entertained me enough, but there was no point that I at all felt like I cared. Partly it was because Ged is kind of a tool (*coughlikeKvothecough*) but also it’s because there was no character development designed to make me care for him or anyone else.

But 15-20 years ago, I know my reaction would have been different. Pre-teen me wouldn’t have cared that Ged’s character changes at the drop of a hat (okay, to be fair, it’s after a pretty traumatizing event, but STILL). She wouldn’t have noticed that events dutifully follow on from each other in a semblance of plot but without any real cause or effect. She wouldn’t have noticed that the narrative is literally all ‘telling’ and no ‘showing’, because 90% of the books she read did that–it’s just the way old-fashioned writing was, and I didn’t often read anything that was less than ten years old. When I did, it was jarring. She wouldn’t even have cared that at one point Ged visits his one friend from wizard school and talks to his 14 year old sister in what felt like the set up for a relationship in the future. (28 year old me found this super icky. Please tell me I’m wrong).

Long story short, LeGuin is an excellent writer. But I’m used to reading Lynch and Martin and Staveley and (even) Rothfuss. I need conflict in my characters, I need shades of gray, I need the events of the story to mean something to me. I read fantasy to laugh and cry and love and feel passionately. To some extent also, I can’t truly love A Wizard of Earthsea also because I write myself (to some degree) and I am often critical of what I read because I know what to look for.

Ultimately, this book is like a model in some perfume ad. It has good bone structure, with beautiful writing to give it some polish, but there is too little flesh and substance–too little in the way of character. I prefer the books I read to have some love handles, something to grab on to, something that feels real.