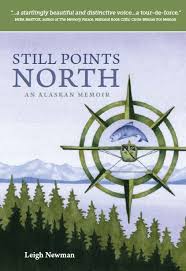 Leigh Newman is hysterical, and also heartbreaking, and also insightful, and also unexpected, and so very, very human. I devoured this memoir in two days because I just kept needing to know what happened to her.

“Still Points North” chronicles Newman’s life growing up between the Alaskan wilderness with her dad, and the wealthy suburbs of Maryland with her mom. Her prose is at once funny to the point of hilarity and heart wrenching as you watch her middle school self struggle with her parents’ divorce, her inability to find stability in either Alaska or Maryland since she’s constantly moving back and forth between the two, and her very palpable need to figure out where her ‘home’ actually is.

This book is jam packed with beautiful, funny, and sensitive prose that takes the reader on a roller coaster of emotions from laughing at seven-year-old Leigh barfing into her father’s lap on a plane ride over the Alaskan bush, to crying with her when she finds out that her mother’s been spending thousands of dollars on their house furnishings instead of groceries and school supplies, to wallowing in depression with her when she gives up her boyfriend because she doesn’t know how to love him.

Newman holds nothing back, honestly scrutinizing every inch of her childhood and how it created the tether-less adult she became in her twenties and the issues it caused in her adult relationships. One of the greatest strengths of this work is that you never feel that Newman is putting the blame on others. She relentlessly questions her own reactions, painstaking riddling out the truth of the situation in a way that is as extrospective (this is totally a real word, I looked it up) as introspective. This a total must-read if you’re into memoir!