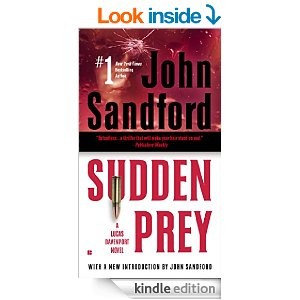 So Lucas Davenport is back for another exciting adventure.  It all starts out with a bank robbery executed by two women.  During the escape, Lucas is involved with the shooting of the two women.  The husband of one of the women (who is actually the brother of the other woman) breaks out of prison and plots his revenge against the police and Lucas.

The rest of the story is a cat and mouse game between the escaped convict (and his super mean friends) bent on revenge, and the police department.  And just to keep it interesting, there’s a dirty cop playing for the bad guys.  There is a lot of shooting, and a fair number of ambushes, so you never know who’s ahead in the game.

I was reading this book on my lunch break during jury duty this spring, and I was really glad that I was on a jury for a civil case, and nothing like what I was reading about!  This is one of those books that you can’t put down.  You just want to know who’s going to come out on top, and who’s not going to make it.  Since the Prey series continues after this book, you know that Lucas is going to make it, but you’re not sure what kind of scars he’ll come out of it with!  I definitely recommend this book for fans of John Sandford and the Prey series.  You will not want to put this book down until you find out who makes it out on top!