> FAQ Home
> Genre: Uncategorized > If negative stars were possible, that’s what I would give this book.

A brief summary of the plot.  An asteroid hits the moon and moves it closer to Earth, causing swelling tides which flood the coasts, earthquakes, and volcanic eruptions that put massive amounts of ash into the air, turning summer into winter.  The story is told through the diary entries of the sixteen-year-old Miranda, who goes from a normal high school student to a person fighting, with her family, for survival.

If you’re like me and you love YA speculative fiction, that sounds good, right?  And then you go on Amazon and most of the reviews are positive and you check a book blog that has stood you well in the past and they loved it!  “Yay,” you think, “I’m about to start an awesome new book!”  So I went into this book ready and willing to love it and part of the reason I’m so upset about this book is I feel liked EVERYBODY LIED ABOUT IT BEING GOOD.  WHY.  IT’S SO BAD, WHY DIDN’T YOU TELL ME, WHY.

Okay.  What was wrong with this book.  Let’s start with the science.  I’m not an astronomer, a geologist, or a meteorologist and it is seems like not only doesn’t Susan Beth Pfeffer have degrees in those areas, but she also didn’t consult with anybody who does.  In the novel, scientist know for weeks that an asteroid is going to strike the moon and the prevailing attitude is, “Weeeeeeee!  Everybody break out the telescopes!”  Nobody is predicting anything bad is going to happen.  Nobody is saying, “The asteroid is going to hit the far side of the moon, so you probably won’t be able to see much,” which also seems like an important point.  The impact apparently causes no debris, which do not strike Earth.  The moon INSTANTLY hops across the sky, appearing closer right away, as well as changing phase, which means it was also knocked sideways?  See the below VERY ACCURATE diagram I made for your viewing pleasure. 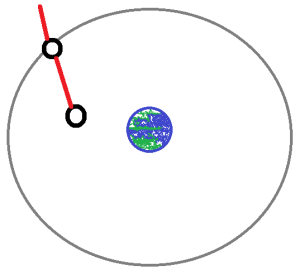 But the sideways push is never mentioned, as far as I can recall.  It’s implied that the moon is pushed directly towards Earth, at unbelievable speeds.  Speeds that would mean the moon would crash into Earth (or at the trajectory it had to actually have taken, be flung off into space to get sucked up by Jupiter or something) because seriously, the moon does not have brakes.  But let’s ignore all that!  The moon gets pushed closer to Earth, nobody is worried about the details, they’re just panicking and worrying about what will happen next.  Massive tsunamis that never stop are the first thing that happen.  Okay.  The moon affects the tides, I’ll allow it.  Coastlines devastated.  Got it.  Next is SO MUCH THUNDER AND RAIN, OMG.  Well, weather is a big pattern that takes time to change.  Water vapor doesn’t just accumulate in the air because the moon moved closer, right?  But asking questions while reading is no fun, so let’s move on!  Next is earthquakes.  Okay.  Tidal stresses don’t just affect the water.  I can see it.  But what about the moon?  Wouldn’t the Earth’s much stronger gravity create massive amounts of tidal stress on the moon?  But everybody in the book is afraid to look at the moon now so who gives a fuck!  Volcanic eruptions follow the earthquakes!  Uh-huh.  Ash clouds that cause permanent grey skies and freezing temperatures in August follow the volcanic eruptions.  But no ash accumulates anywhere because what goes up doesn’t have to come down?  And constant breathing of the ashy air causes a few cases of asthma and sure makes ice skating hard but other than that, no worries!  The whole book, constantly, just one bad bit of science after another, it’s so frustrating, make it stop.

Then there’s the little stuff.  The library is one of the last things in town to close but nobody ever checks out a book called “10 Ways to Catch a Squirrel and 15 to Cook It!” or “Did You Know Some Trees Are Edible?  Fuck Yeah!” or “Indoor Gardening, Why Not Give It a Try, Assholes?”  Or there’s a scene where Miranda’s family is living in the sunroom because it has a wood stove, their only source of heat, and they all decide to cut their hair and “throw it on the fire and watch it burn” and nobody says “Wow, that smells terrible and sure was a bad idea in our closed environment.”  Or the fact that the family subsides on canned food for months and nobody mentions where they are putting all the empty cans, because trash service sure as hell isn’t running.  Miranda’s house has well water and the electricity is out but the (I assume) electric water pump keeps running.  There are a loooooot of little things and they all add up until you twitch every time a new one comes up.  Or maybe that’s just me.

Miranda, the main character, is a whiny, selfish brat who cannot seem to grasp the severity of her situation or think of anything besides prom or chocolate.  Really, Susan Beth Pfeffer?  Really?  She’s a sixteen-year-old girl so prom is the end all be all EVEN WHEN STARVING TO DEATH?!  REALLY?!  Miranda is also passive beyond all endurance.  Her best friend decides to starve herself to death because “it’s God’s will,” and after saying, “Oh Megan, please eat” one or twice, Miranda gives up trying to convince Megan that SUICIDE BY STARVATION IS NOT GOOD.  If a friend of mine told me they were trying to starve to death?  I WOULD NEVER STOP YELLING AND/OR BEGGING.  WHAT THE HELL.

Firewood is seen as vital to survival but only Miranda’s brothers cut down trees.  While Miranda gathers kindling (which is a by-product of cutting down trees anyway, but whatever) and feels useless.  When the bad weather sets in, Miranda stays inside and apparently does laundry (by hand) every day while her brothers do the manly, manly task of chopping wood.  I assume with their dicks, since Miranda isn’t even thought of as a choice for the task.

Then there are the sacrifices made by various members of the family.  Miranda’s mother barely eats at all, right from the start, to give her children more food.  Never mind that the three teenagers would probably do a whole lot better in the new, frightening world with a healthy mother.  And then Miranda’s mother asks Miranda to cut back to allow her brothers to eat more.  Her older brother because he is still recovering from an illness and her younger brother because that’s the person the family picks to survive?  They all kind of just decide that they want Jon, a 13-year-old, to be the last one to die.  Because if all his relatives die, a 13-year-old sure has a chance in the new, brutal world.  EXCEPT NOT AND YOU ARE ALL STUPID.  Oh, and the family also has a cat who they stocked up on supplies for and NOBODY EVER SUGGESTS EATING THE CAT FOOD.  ARG.

At one point during the long, hungry winter, Miranda decides to weight herself.  “I was 118 pounds before all this started and I’m 96 now.  That’s not so bad, nobody is starving to death at 96 pounds.”  WHAT THE HELL, WHY WOULD YOU PUT THAT IN A BOOK WHERE A LARGE PART OF YOUR INTENDED AUDIENCE IS TEENAGE GIRLS, SO IRRESPONSIBLE, I CAN’T.

There’s more but I can’t think about this book any more.  It’s so un-feminist in such a subtle, undermining way.  I can’t.  I hate this book.  I hate this book so much.  I want to punch this book in the face.  If you ever feel the urge to read this book, don’t.  Instead find a copy of The Age of Miracle by Karen Thompson Walker and read that, because it is a lovely, thoughtful book, whereas Life As We Knew It is an un-researched, problematic mess with a whiny main character, seriously, so much face punching is needed.  No stars.  Thumbs down.  Dislike.