> FAQ Home
> Genre: Science Fiction > There is no such thing as a battlefield where no one dies

Wow. I really got lucky. This is the first manga book I’ve ever read, and boy was it a doozy. I had some trepidation about adapting to the back to front, right to left format, but the story was so involving and fun that it was hardly an issue.

Keiji is a Japanese jacket soldier preparing for his first battle, not against another country or group, but against the mimics. It is not known where they are from or what exactly they are, but one thing is clear. They mean to wipe out all of mankind. The problem is, when he wakes up, he feels that he’s done all of this before, every step of his day. In fact, he’s almost sure that he died yesterday. It must be nerves, it had to be a dream. 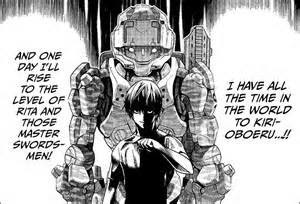 But no. Keiji is in a loop, and he is destined to relive thst same day time after time. Within this framework, he applies himself and becomes and better and better jacket soldier, learning by studying Rita, the Valkyrie, of the US Special Forces. Battle after battle, death after death he gets closer and closer to the key of this dilemma. Once he truly joins forces with Rita, the answer to ending the loop and turning the tide of the war becomes clear. But not before he has a chance to learn to truly care for Rita and fall in love.

Once I got the hang of this, I was hooked by the involving story and highly-energized artwork. I throroughly enjoyed this terrific book and being introduced to manga. Can’t wait to do some more exploring!