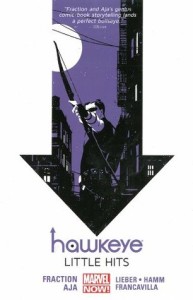 When you think “superhero comic,” nothing about what Matt Fraction is doing with Hawkeye will come to mind. The style alone with its limited color palette and cartoonish art (but in a wonderful, highly stylized way) is enough to set it apart. Each issue (for the most part) stands alone. Also for the most part, the concerns of this comic are not thwarting global domination or defeating bad guys with world-destroying powers or stopping galactic assholes from destroying the Earth.

Nope, our two Hawkeyes (Clint Barton and Kate Bishop) are mostly concerned with things like helping friends to survive and prep for a hurricane, dealing with the minutiae of relationships and intimacy issues, setting up new apartments and untangling messes of cords for your electronics (which, okay, may involve calling your genius pal Tony Stark in to help), job burnout, you know, stuff that like that. Not to say that Barton’s life is normal and what happens to him here is normal, just that it all plays out on a much smaller scale and concerns things that are much more mundane than you would expect.

There’s a couple of recurring baddies that pop up in this volume, but they’re honestly the least interesting part of the whole thing. (Although the Russian mobsters continually overusing the word “Bro” is actually becoming a more funny joke the longer it goes on.) Kate Bishop might actually be my favorite part if I’m being honest. She’s badass.

The most notable thing about this volume is the last issue, which is told entirely from the perspective of Clint’s rescue dog, Arrow/Lucky/Pizza Dog. (Fittingly enough, it is called “Pizza is My Business”.)