> FAQ Home
> Genre: Fantasy > I guess being dead gives you a different perspective on life

And the Harry Dresden binge continues. Other readers on this site have made it known that the series gets better starting with book four and I don’t doubt that. Despite my impatience with Susan (when did she become the overdone girlfriend-slash-horror-movie-twit?) this book got me deeper into the whole mythos and seems to be setting things up for books and books to come. There is a a lot more going on with the Nevernever, not the least of which is Harry’s Godmother, Leanansidhe. There is some rich territory to be mined there for sure. I also really enjoyed the addition of Michael, a Knight of the Cross, and his sword Amoracchius. He is a powerful ally to Harry and an interesting counterpoint to Dresdens smartassery. Murphy and Chicago’s SI are still in the picture, so there is some nice continuity there.

We pick up about a year from the end of the last book. The story gets off to a gallop with Michael and Harry battling a ghost-that-is-more-than-a-ghost, one of a recent flurry of supernatural mayhem that has beset the Windy City. It soon becomes clear that something bigger and more frightening is at work here and it shakes Harry to his very core. Again, I love it when we get to go inside Harry’s mind and heart as he works his magic or has dark magic worked upon him. It adds a dimension to the action that I appreciate.

Getting introduced more intimately into the complex vampire world, the Red, Black and White Courts, we are taken into realms far beyond any vampire lore I am familiar with. Besides that the characters of Thomas and Justine are quite promising. There is so much going on this book that I am having trouble trying to recount the salient points. The Nightmare-Lydia-Kavros, Susan’s abduction and grave peril. Harry seriously pissing off his Godmother. Again. Our heroes may be alive at the end of this story but it’s no happy ending, that’s for sure. 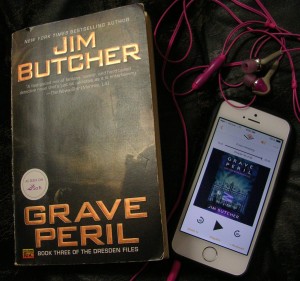 Oh, also a note on format. Part of the time I read the print version and part of the time I listened to the audiobook narrated by the excellent James Marsters. Many thanks to those of you who have praised this facet of the work. I will mix and match on more books in this series.