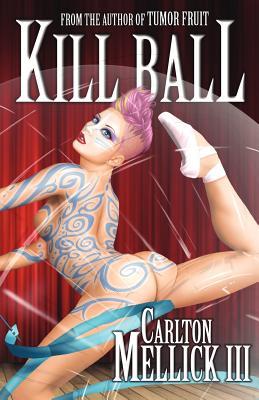 ‘Kill Ball’ is the story of a lonely guy, Colin, who accidentally caused his mother’s death when he was a kid. All he’s ever wanted was to be held, but the increasingly isolated world he lives in has made this desire impossible. He becomes obsessed with a stripper he believes he has a special connection with. A killer is stalking the streets and seems to have his sights set on Colin’s girl. Oh yeah, and everyone rolls around in giant hamster balls. How could I have missed that out?

There are probably a few plot holes that could be picked here, but the insanity level is so high that if you’re actually going to attempt to pick holes in the logic your brain is liable to melt out of your ears. Don’t say I didn’t warn you! Anyway, for me this was one of those books that I just couldn’t put down. It was a cool idea that panned out very well and springs a few surprises, one of which made me laugh out loud. I was hooked from start to finish, and I loved the sense of humour and the general weirdness of it all. The combination of mystery thriller and strange romance with science fiction elements and dystopian setting melded into a uniquely satisfying story and one I won’t soon forget. Mellick is fast becoming one of my favourite authors.

This really is a must read for anyone who is sick to death of predictable plots. It’s definitely weird, but it’s also one of the best books I’ve read in ages. Highly recommended.