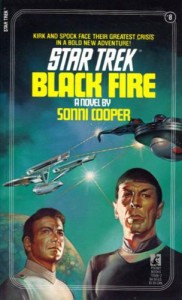 “His dark shape flamed through the room,

as he bargained for possession of the women.

Shrouded in a garment made of lightning,

he took the ladies as his own,

To see his face through the veil of dark flame.

To touch his hand, strong and warm.

To belong to this man of fire, if only for a moment.

Time too short for love complete.

He is a shadow of mystery.

Spock as a space pirate?  Really not as bad as you are probably thinking.

There is A LOT going on here.

After an explosion on the bridge of Enterprise critically injures Captain Kirk, Spock and Scotty steal a space cruiser and head out in search of the suspected saboteurs. They land on a planet and find 3 Romulans and 3 Klingons who are investigating sabotages of their own. They decide to pool their resources but before they can do anything they’re kidnapped by the Tomarii, who have led them all here.

The Tomarii take them to their home planet and force them to fight in their wars. The Tomarii leader falls in love with Spock and won’t allow him to be harmed. Spock develops feelings for the Romulan commander and before she dies, he promises to warn her empire of the Tomarii threat. Eventually no one is left of the original party except Spock and Scott.  Spock falls victim to an injury sustained in the original explosion and is paralyzed.

Spock attempts to commit suicide twice in order to free Scotty to make an escape.  Before his 2nd attempt succeeds, Kirk and McCoy beam down and save them, having followed clues Spock left behind.  Phew! That’s, like, the first 3rd of the book!

So.  They return to the Federation and as soon as Spock is recovered he sends a message to the Romulan Empire, warning them of the Tomarii threat.  The message is discovered and Spock is convicted of treason and sent to a rehabilitation colony.  There he meets a Romulan prisoner named Desus and together they escape to a pirate planet.

It turns out that Desus is one of the pirate leaders and he and Spock resemble one another closely.  Together they become the pirate Black Fire and become legendary throughout the galaxy.  They become very good friends, nearly as close as Spock and Kirk.

Spock, as Black Fire, is captured by Enterprise. The Romulans recapture him and take him back to the Empire, where he is arrested for treason for stealing the cloaking device that one time.  But he is pardoned by Desus who turns out to be a Supreme Commander in the Romulan military.  Spock joins the crew of Desus’ ship. Another act of sabotage leads them back to the Tomarii. Enterprise has been drawn there as well.

Kirk and Desus, with Spock as mediator, come up with a plan to work together to defeat the Tomarii.  It works but Enterprise is slightly damaged in the action. The Romulans depart, with a plan to return in a few days and capture Enterprise.

But then Spock steals a cruiser and escapes back to Enterprise in time to warn them to run away.  He then reveals that he has been undercover since the first explosion. He never really betrayed anyone.  Except maybe Desus, who probably committed ritual suicide rather than be punished by his Empire for the betrayal.

It sounds ridiculous—and it is.  But it is ridiculous fun, and at least there was no slash, no stomping on the prime directive, no astral projection rape…

Random Thoughts Written Down as I Read:

The usual crew is all mentioned, including M’Benga and Rand.

Hold the phone!  Shut the front door!  One of the Klingons is named Melek.  Not Kelek, Melek.  Oh sure, there’s a ‘K’ involved, but still…

Spock’s ear is forcibly pierced by his Tomarii captor, which allows him to wear a rad earring later when he’s a pirate.

Spock’s pirate outfit sounds REALLY COOL!  I am not even kidding.

Scotty rocks!  He is fiercely loyal, adapts to anything, can make friends with anyone, can fix anything, can create a still anywhere—he even sews up Spock’s wounds.

Kirk doesn’t sound like himself.  He sounds petulant and anxious.  He has several meltdowns on the bridge. He whines and pules and stomps his feet.

It is not believable to me that Kirk didn’t know Spock was gone. During his long recovery, he never once asked where his BFF was? He doesn’t know he’s been assigned a new 1st officer until that officer shows up on the bridge?

If Ilsa was the saboteur on Enterprise, why is she so amazed at transporters later?

How can you seriously state that Spock is incapable of returning the affection of women because he is Vulcan? How do you suppose Vulcans procreate?  How do you explain the relationship between Spock’s parents?  Damn, people. Get over it.

It’s treason for Spock to send a message to the Romulans, but not for Kirk to cooperate with them?  Weird.

Spock is pretty stoic about Desus’ presumed death, even for a Vulcan.  They were best friends.  Desus was like a Romulan Kirk.

What a tidy little reset button.

The author is not a great writer. She doesn’t tell the story so much as she reels off bullet points. She tells, but doesn’t show an awful lot.

The Corsair/Tomarii star system doesn’t seem plausible to me.

“To find out if something is impossible, try it!”