The humor we know in Awkward Yeti is there, but the clever way of learning is added. The book is cartoon illustrations and for the higher preschool to first or second grader (the second grader might be a little on the younger side). This time we learn how the ocean works from a krill (who is not the swiftest current in the sea) and an octopus (who is patient and sweet). Our narrators do not just tell us all the little and big parts of the big blue, but also deal with environmental issues as well. Facts in the story and afterwards (along with a glossary) round things out.

Everything about the book is loud, fun and to top it off, informational. This might be a fun book to (not) read before the summer beach trip (judge your child, it does mention sharks, but they are nice (mostly) sharks). And there is the line about “a million years” before something with happen and krill mentions they would be “really old” (so sensitive child might not be your audience).

There might not be new information included, but it is a fun book to have in your collection for a school library or classroom. And for the child who is just starting out, it is a nice introduction, but also can grow with them.

And as a fun FYI, The Sun is Kind of a Big Deal is available in Chinese as well. 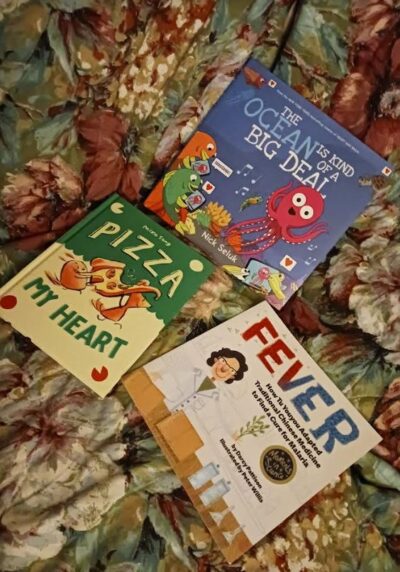