> FAQ Home
> Genre: Fiction > He will not kill me. He does not get to make me a statistic. 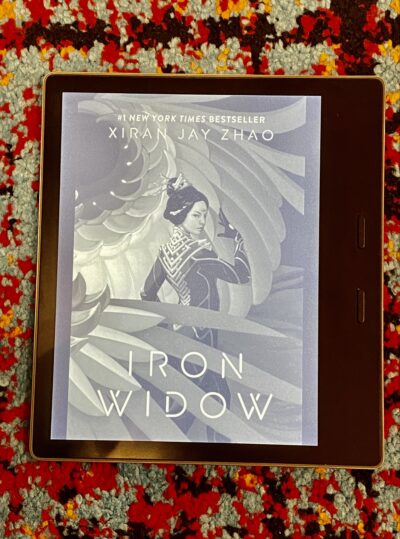 You cannot appease someone into loving or respecting you.

I chose this book because I saw it reviewed on CBR14 and damn, did it look interesting. Feminist wrath? Yes, please. To sum it up, Wu Zetian is angry. Not just a little pissed, but vengeful and rightly so. In her world, humanity is in a centuries-long battle with the Hundans, an alien species which invaded their planet. The only way to keep the Hundans from overtaking the entire planet is to harvest the carcasses of the elite class of massacred Hundans and use their “husks” to build chrysalises: massive, human-piloted robots, which are powered by the pilots’ various degrees of spirit energy. Each chrysalis requires a male and female pilot to steer its movements. Of course, the male pilots are the revered heroes and the women are “sacrificed” as collateral damage as their weaker spirit energy is nearly always overpowered by the male pilot’s energy during battle. Young women, such as Zetian and her older sister, enlist to become female pilots, with the hope of being one of the few “balanced matches” between a male pilot and an almost equally strong female pilot. Girls are raised from birth as commodities, to either be sold as virgin brides to the highest bidder, or sacrificed to the pilot program, for which the girl’s family receives a huge payout from the military upon her death.

So, going back to Zetian (who is completely over this sacrificing-of-young-girls bullshit), when she attempts to enact her plot to avenge her sister’s death against the pilot who killed her during training, she accidentally kills him while they are both piloting the chrysalis. Oops. It turns out that Zetian has ridiculously high spirit-energy. This opens up a universe of other problems as the military tries to figure out what to do with a powerful weapon who has no fear of her captors or of death. The solution is to pair her with a male pilot, who is not only a convicted murderer, but who happens to be the other super powerful problem child in the military’s arsenal.

I really really wanted to love this book. But I just couldn’t get into it. The characters were non-stereotypical, which I thoroughly enjoyed, but I really wanted to shake Zetian for being so stubborn sometimes. Granted, she had very few choices to begin with. But I think my main issue with this book is not with the story, but with how depressed and angry it made me. The entire concept of women’s bodies being used for political gain and to protect the lives of “more worthy men” is too fucking real. Like way, way too real. The revenge felt hollow because every time Zetian won, she still lost so much.

I was going to give this book three stars. However, I absolutely adored the love triangle and how the relationships developed in unexpected ways.

The good: The world building was very good. Despite other issues I had with her, I loved Zetian’s no-fucks-left-to-give attitude. If any book needed a kickass soundtrack to go with all of the sweet, violent revenge, this one does.

The bad: As things kept getting worse and worse for Zetian, I had to take a break. I have not read a story that has made me this angry and feel as frustrated as this one did. I should not fault the book for that. It just made me too sad and angry at times to really rejoice in the meager victories.