Now I remember why I usually hold off on consuming media until it’s over and done with: I’m too gosh darn impatient. Per Shonen Jump, Fujimoto hasn’t put out enough chapters for a volume 12 yet, so no beginning to the second “act” of Chainsaw Man, and it’s not until next month that the anime begins. Thankfully, I’ve discovered that Fujimoto has another series I can dive into here soon once I get the urge. Unfortunately, that’ll be a little while, because I’m still trying to get my head back above water with my to-read pile from the library. I’m down to 9 books now, and I’m done with the majority of the ones that are hot-items I can’t renew endlessly, so I can soon leave that on the backburner for at least a hot second, but not quite yet.

There’s also a pile of books from the thrift store staring at me, as well as all those Book of the Month Club books I missed out on reading due to checking out too many books from the library and being busy with other things (like our house hunt and eventual move). But those don’t have any sort of timer on them (just emails from Book of the Month asking how I liked the book; I didn’t read it yet, okay!), so they’ll probably just have to wait. Besides, I can probably read that entire other series in a day, so it’s not like it’ll be a long diversion.

Onto Chainsaw Man, these volumes are when the pieces really begin to fall into place, and I don’t know that there’s much I can say without spoiling things, so beware of spoilers. Throughout the series, we’ve gotten hints that maybe Makima isn’t what she seems to be, that there might be something more sinister behind her actions, and this second half of the first act is when that becomes clear as day. We knew from the very beginning that she sought to use Denji, taking advantage of his teenage hormones to get him to be her lapdog, but it turns out there’s a far more sinister angle to it all than we ever could’ve imagined. That friendship I mentioned being won over by? She makes him lend a hand in killing Power to prove he’s fully her willing lapdog, his own free will thrown out the window.

I knew it was coming thanks to accidentally spoiling myself via the Chainsaw Man twitter tag, but it still broke my heart into a million pieces. He would later make my heart whole again for a brief second, letting Power come back for one more moment, only for the realization to come hard and fast that she’s only here to help give Denji that extra little bit of help he needed before bowing out once more. You know, just to turn that screw a little more. I really don’t look forward to having to go through all that again with the anime.

But that really was these volumes in a nutshell. 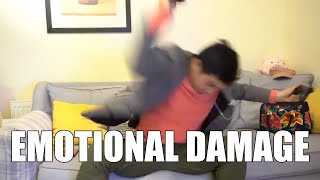 Like I also saw a meme on the Chainsaw Man twitter tag about how a hand holding a snowball is liable to send readers of the series into hysterics, and I wondered what the heck that could possibly be about, especially after the stuff with Power. Yeah… with Power, I was too emotionally devastated to come close to tears, but the part they are jokingly referencing is what nearly got me. Had I not seen the meme prior to reading it, I probably would’ve actually succumb.

However, it wasn’t only those two moments. Those were only the highlights. Or lowlights, depending upon how you look at it. These volumes were just page after page of overwhelming dread that I was worried would never end, would never reach an even vaguely positive conclusion. Thankfully, I wound up being wrong. Denji, in the end, “wins” out, finishing off Makima and, against his will, adopting the new control devil in the hopes that he can prevent her from becoming like Makima, the control devil before her. I honestly have zero idea where Fujimoto will take things from here. Apparently Denji is set to go to school in act 2.

I’m more interested in what will come of the new control devil, though. I know she’s not Makima, but I cannot help but hold Makima’s actions against her. And I know that devils will forever get reincarnated, but I’d kill the control devil dozens of times over if I were Denji after all that she’d put me through. Maybe that’s just me, though. Whatever happens next, I just hope Fujimoto can bring back the fun to the series with the second act and give us readers a break from our emotions.