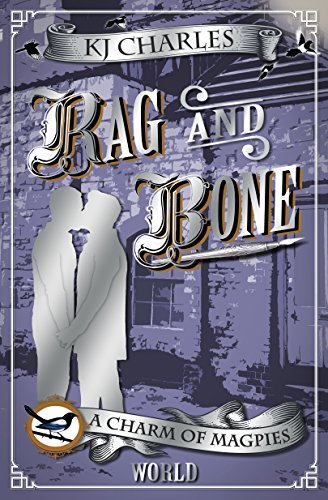 Sometimes this happens with K.J. Charles and me—and it’s often in this particular magical world of hers, come to think of it—where I am way more interested in the plot and worldbuilding than I am in the central romance. Here, partly it’s because the couple are already together at the start of the book, and the tension of “will they stay together” is just not as inherently interesting to me as “how will they get together and when”. But also, partly, there’s just something about the way her writing mixes with this world that doesn’t full gel for me the way her other historical books definitely do.

But the history and magic were fantastic, and the investigation into the mysterious death that happens here (spontaneous human combustion!) was really satisfying. The main two characters are Ned, a wastepaper man (collects old paper and sells it to people who can repurpose it, which is a fascinating bit of historicity that I had no idea existed), and Crispin, who was found using magic illegally, but given a chance to reform because his master basically abused him and coerced him into doing things he didn’t know were wrong or illegal (the story of this is in another prequel novella to this one, that I actually enjoyed a little bit more than this, because it does show Ned and Crispin first getting together). Crispin’s arc here is to relearn himself in relation to his magic, and Ned’s is to learn to feel secure in his relationship with Crispin, when there are such imbalances in their relationship, because Ned is poor and Crispin is not, and Ned is black and working class, and Ned is not.

I’ve never yet read a bad K.J. Charles book, but this wasn’t my favorites.