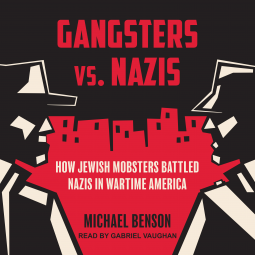 CBR 14 Bingo: Bodies
Bodies hit the floor a whole lot of times, if not permanently.

With Nazism on the rise in 1930s America, protected by free speech laws, a Jewish judge sets out to deal with them in the only way he knows how – by setting gangsters on them.

I’m not big on WW2 stories, mostly because I feel like the market is rather oversaturated. But rather perversely I’m still always on the lookout for unique stories in this setting, because those stories that are under-told are generally quite fascinating. Despite the title, though, this book is set not in wartime America but in the lead up to it. Still, it made for an entertaining listen.

I liked how vivid the writing was – the author is not at all afraid to take sides, lambasting the Nazis and lauding the gangsters. He tackles the stories told with an irrepressible glee. I also liked the cinematic excerpts and the vintage slang, though I know it won’t suit everyone. But the book also opens the world of Depression era America up to the reader in a factual way, making you feel as though you are reading about the events in the newspaper.

However, I think the story was somewhat limited in scope – we might travel across the nation and visit gangsters on their home turfs, but ultimately there’s not much variation in the actual beating up of the Nazis. The word count is instead puffed up with detailed discussions of the gangsters themselves, which sometimes works and sometimes doesn’t. The trouble, I think, was that there are just so many people to keep straight that they become quite indistinct in one’s mind.

My copy of this book was an audiobook, narrated by Gabriel Vaughan. I thought he did a good job of playing up the somewhat hammy nature of the book in a voice that reminded me of an old-fashioned broadcaster.