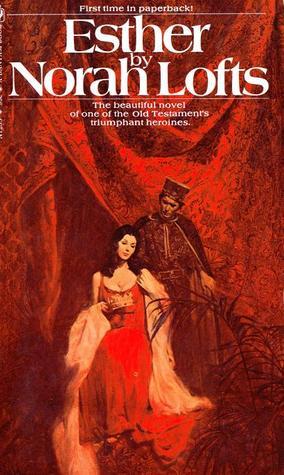 CBR 14 Bingo: Snake
There are several snakes in the grass who lie in wait for the king, most of all his favorite Haman.

Esther is Jewish, but her husband the king of Persia doesn’t know it. Which is rather a problem, as he has allowed his courtier Haman to order the massacre of all the Jews in his empire.

Did I really need to give a summary? It’s in the Bible!

This was a short, swift read, starting with the casting out of the first queen Vashti and ending with the reunion of Esther and Artaxerxes. The author is fairly faithful to the plot of the Book of Esther, but she softens some of the odd or gruesome aspects – for example, Artaxerxes’s decree that the Jews may defend themselves is omitted, with the writ merely being reversed instead.

I enjoyed the depth of characterization that Lofts brings to the story. Esther is pretty, sure, but what wins Artaxerxes over from the start is her wit and personality. Artaxerxes (what a pain to type, alas) is lovable but shallow, a deficit he realizes by the end of the book. Even more minor characters like Vashti are sketched out in a clear and compelling manner.

I only wish the characterization of Haman was elaborated on, as he pops up early on as a villain and his behavior is ascribed to an inflating ego and his nation’s hatred of the Jews. I would have liked to see more nuance in him, if only to dislike him more!