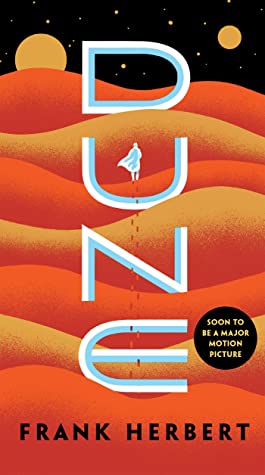 When the Atreides family is betrayed, the heir Paul and his mother Jessica are sent on the run – and into the path that leads to his ultimate destiny.

About three quarters through this book, I texted my friend M, who loves this book, the following:

Arrakis is the Middle East. Melange is oil. Is Paul a white savior?

That’s a very flippant way of looking at a book that carries a lot more within itself than that. Dune is about environmentalism, about religion, about the nature of power, about my beloved political machinations. I respect it a lot. But I didn’t always enjoy it, and that is likely where my irreverence is born.

The world-building in this book is off the charts. The history of Arrakis and the Empire sprawls out in a luxuriously uncontrollable way, full of organizations and goals that are as alien as they are familiar. I loved following all the factions with their disparate aims, all trying to manipulate one another. And what I enjoyed even more was the tug-of-war within Paul as he is built into a myth whilst trying to remain a man.

But I found the writing clunky and often on-the-nose, and the characters felt as though they were going through the motions, tugged along here and there like puppets on a string. While I enjoyed the concepts behind Dune, I did wish its execution were more successful in a literary sense, for that might have elevated it to a book I enjoyed as well as appreciated.

Still, I am glad to have finally tackled one of the giants of the sci-fi/fantasy world. It’s a fun thing to boast, especially with the Dune movies coming out, “Well, I’ve read the book!”