> FAQ Home
> Genre: Fantasy > ‘Those who see the dead soon join them.’ 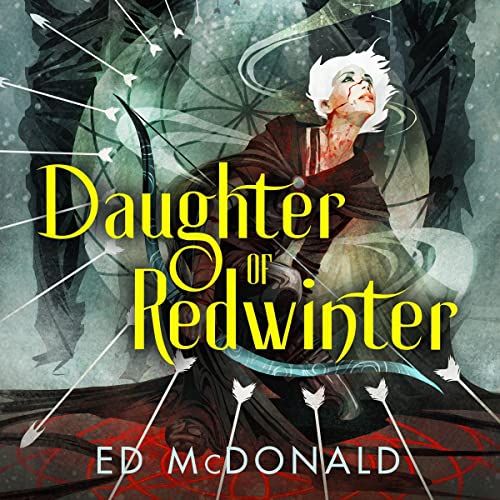 CBR 14 Bingo: Time Raine races against time to save Ovitus and to provide proof at the trial.

Raine and the cult she has been traveling with for years are besieged in an ancient monastery when she rescues a mysterious wounded girl. But this act of kindness only serves to pull her into a dark conspiracy.

I picked up this book because I am always on the lookout for fantasy authors I’ve not read before, and because I’ve always enjoyed stories with death magic. But what stood out to me in this book were actually the characters.

Raine is a realistic seventeen-year-old, and a major part of this book is seeing her try to figure herself out even as she grapples with magic and mysteries. She often made decisions that frustrated me, but it always made sense why she made them. The secondary characters are also very vivid and complex, both good and bad. I also enjoyed the sharply humorous bits peppering the story – I’ll not soon forget a certain romance novelist!

However, I did feel that this book meandered for a very long time. After a really gripping start to the story, the plot sags as we hit the road, and does not tighten up again until fairly late in the story. I am not complaining that the story had a slow pace – rather that an odd number of things popped up that were not really addressed in the story, some of them major.

I also am a little disappointed by the depiction of Ovitus. He is supposed to be a rather unlikable character, and he certainly had enough obvious personality flaws for it – but I did not love that one of them, according to pretty much every character in the story, is that he is obese. It felt like an out-of-place value judgment about one’s worth and weight.

I listened to the audiobook of Daughter of Redwinter, which is narrated by Samara MacLaren. I thought she did a very good job of voicing Raine, and I found her accent fitting for the setting. However she did not always have a lot of variation between some characters’ voices – I had trouble differentiating Raine and Esher when they were having conversations with each other, for example.