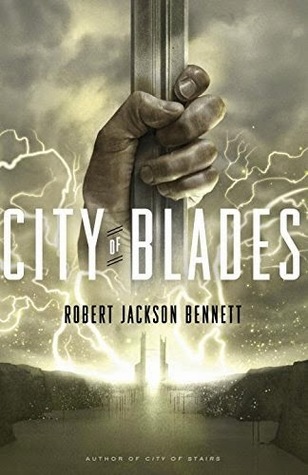 “Not one war, she realizes—every war, all wars ever fought by humanity. Never one side prevailing over the other, never separate and disparate groups, but a blazing, monstrous act of self-mutilation, as if humanity itself was cutting open its own belly to send its intestines spilling into its lap.

The sword speaks to her: Are you these things? Is this you?”

This series continues to be so good, and in such unexpected ways. It’s just so rich in basically every way a story can be rich: in character depth, authorial voice, world-building, dialogue, thematic underpinnings, cool shit, and if you write any kind of anti-war book that’s even halfway good, let alone this good, I’m gonna like it. Not to mention, it doesn’t commit Ashley’s cardinal sin of taking itself too seriously. This book feels like it’s populated with actual humans, ones who suffer and die and do heroic things, yes, but also ones who make dumb jokes and can laugh at each other.

Our main character this time around is General Mulagesh, who played a big part in book one, mostly to be the brash competent one who inserted some comic relief into tense scenes. But here, we go deep on Mulagesh. Her grumpiness and brashness is still amusing, but we also see the inner-Mulagesh, the one who is still struggling to deal with her past experiences and make something of her future. She’s sent by Shara Komayd, now Prime Minister of Saypur, to complete a covert mission to Voortyashtan and find out what happened to a missing Saypuri, along with making sure that nothing Divine is going on. Spoiler alert, something Divine is going on, and Mulagesh once again gets dropped into it.

But the flavor of this story is different than the last one. This one is more about reconciling with your past, something not just Mulagesh has to do, but Sigrid (and his daughter Signe) and the Dreyling Empire, and the Saypuri (which they are not wanting to because they are the ones in power, so much so that they are pushing Shara out of power because she’s shaking things up too much), and the Voortyashtani, who are not only warring with factions within themselves, but also being occupied by not one but two other countries. Their god and their past plays a significant role here. If I have one criticism, it’s that I wish it had a major Voortyashtani character; Bennett has Signe play that role because she was raised there, but an actual native’s perspective would have been nice, too.

All in all, this series continues to be great and I’m excited to get to the last book in July.