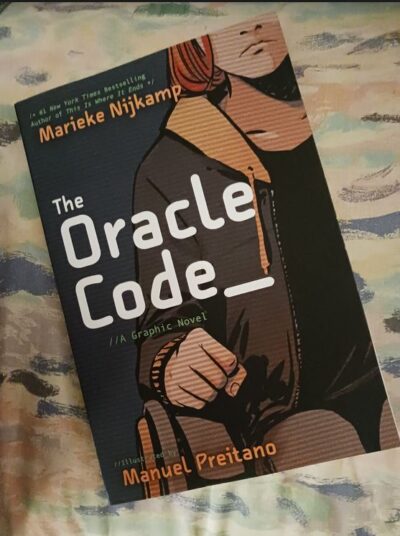 I know a bit about the DC universe, but not as much as I would like. Therefore, when I saw this graphic novel, The Oracle Code_ was Barbara Gordon but in a wheelchair, I was surprised. I don’t remember that…. but then again, as said, I don’t know as much as I would like. I wondered if this was an alternative universe story, or had it happened before in other works? Either way, it is an interesting story that Marieke Nijkamp created.

We find Barbara entering a home for her rehabilitation after she has been shot and paralyzed. It is called Arkham Center for Independence. (When will people learn anything with Arkham attached is bad news?) With new friends, and a growing understanding that yes, things are different, but they are the same too, she finds out why kids have gone missing from the center; what the spooky sounds are and how to kick some butt with your mind, computers, new tech hacking and even an old school hacking trick called breaking and entering by lock picking.

The book has the main theme of showing that no you do not need to “fix’ people who are “broken” as they are not broken. They were, are, and always will be whole. Maybe that theme is a little pushy at times, but still the representation of other abled people was a nice touch for a superhero. Even though the story is contained, and an ending is found, there could be a series.

Manuel Preitano created typical graphic novel illustrations. The details can be busy, but sometimes focused. They have good color but tend to be dark. This seems to be a DC theme that the character of colors and background is going to be dark. The book even starts at night, the stories a girl called Jana tells are all spooky/haunted tales, the building itself is haunted looking. One of the cleverer aspects is that “background characters” are done without real colors and details, while the main character or the focused-on character is in color, detailed and prominent aspects. One of the ways things are lightened are the Batman references (Batman playing cards, a Robin doll one of the children have). These can be a bit more subtle, but they are there. The illustrations are a character that needs to be watched.

And while there were some bumps for me, overall, this was a nice book. It was a onetime read for me, but for kids into superheroes, coding and/or hacking, and books about friendship (at least 10 and up, though I would say 12 and up due to some concepts) this would fall into a several readings will happy category.